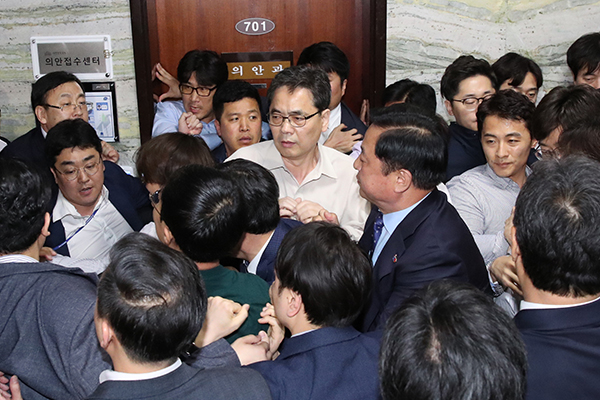 Anchor: Physical altercations at South Korea's National Assembly over fast-tracking a set of disputed reform bills carried into the early hours of Friday. Concerns over more brawls is on the rise as the parties remain entrenched in their respective positions.
Choi You Sun reports.

Report: After an overnight scuffle over the main opposition Liberty Korea Party's(LKP) attempt to block the ruling Democratic Party(DP) and three minor parties' push to fast track a set of reform bills through parliament, tensions continued to escalate with the parties berating each other.

Despite the LKP's objections, the four parties agreed to accelerate the passage of bills involving electoral reforms, the establishment of an independent body to investigate senior officials and an adjustment to the investigative powers of prosecutors and police.

DP Chairperson Lee Hae-chan on Friday said violence which is unimaginable in South Korea's National Assembly was carried out by the LKP, adding that the party has left an indelible stain on parliamentary history.

Based on video footage of the altercation, the DP said it will file a complaint with authorities against dozens of LKP representatives and party officials for violating parliamentary laws that ban brawls at the Assembly.

The ruling party also vowed to proceed with placing the bills on the fast track on Friday.

The minor Party for Democracy and Peace and Justice Party also accused the LKP of violating parliamentary laws.

The LKP accused the DP of violating parliamentary laws, with party floor leader Na Kyung-won saying that her party fully resisted a "parliamentary coup" in order to protect liberal democracy.

Dozens of party representatives and aides are again preparing to block the other parties from proceeding with the fast-track process by gathering in front of conference rooms where special committees handling the bills are expected to convene on Friday.

The minor Bareunmirae Party, which holds the casting vote in moving the fast-track process forward, is on the verge of an internal breakdown after party leadership removed two representatives from the judicial reform committee due to their opposition to the bills.

During a general meeting on Friday, the opponents of the bills are expected to call on the party leadership to step down.
Choi You Sun, KBS World Radio News.
Share
Print
List