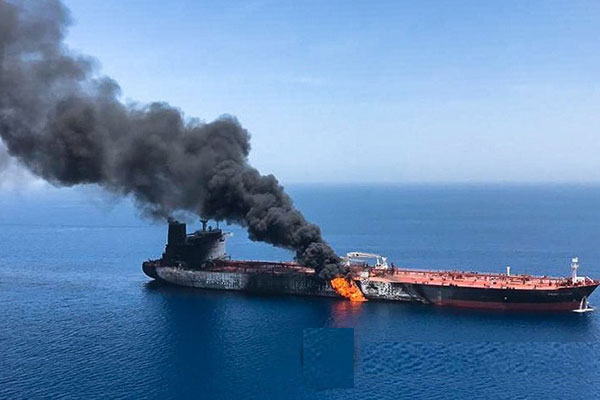 Anchor: In the early hours on Thursday morning, two oil tankers were attacked in the Gulf of Oman. The ships were carrying petrochemical products to Asia. As geopolitical risks are rising along the major crude delivery route, the South Korean government is cautiously observing the escalating U.S.-Iran dispute.
Kim Bum-soo has more.

Report: Two oil tankers were hit in the suspected attacks near the strategic Strait of Hormuz on Thursday, just a month after four ships were struck in a similar incidence.

The vessels have been identified as the Norway-based MT Front Altair and Kokuka Courageous, managed by a Singapore company.

[Sound bite: US Secretary of State Mike Pompeo]
"It is the assessment of the United States government that the Islamic Republic of Iran is responsible for the attacks that occurred in the Gulf of Oman today. This assessment is based on intelligence, the weapons used, the level of expertise needed to execute the operation, recent similar Iranian attacks on shipping...."

The U.S. military released a video that purportedly shows Iran's Revolutionary Guard removing an unexploded device from one of the attacked vessels.

But as Iran’s mission to the United Nations rejected what it called “unfounded” U.S. accusations, political analysts, including Lebanon-based Amine Kammourieh, argued Tehran doesn't seem to be responsible.

[Sound bite: Amine Kammourieh - political analyst (Arabic)]
"There are some who say that this is an attempt by the Iranians to pressure and say 'look what will happen in the world in case of war.' This war will be costly and there might be some kind of negotiations, but the Iranians know very well that had they been behind this they would know the dangers. I believe that the Iranians were not behind this issue since of course they don't want to negotiate under American conditions but will also not raise the white flag."

Oil prices jumped on news of the tanker explosions. Both Brent and the Western Texas Intermediate(WTI) rose as much as four percent before retreating. At the New York Mercantile Exchange on Thursday, the price of July delivery WTI closed two-point-two percent higher a barrel.

The Strait of Hormuz is a key shipping lane through which around a third of the world’s petrochemical shipments pass. Around 80 percent of South Korea's oil imports come from the Middle East and about 73 percent of that comes through the strait.

Before a closed-door meeting with the nation's oil importers on Friday, officials said that there is no supply issue as of now but the government will prepare for possible contingencies.

During his state visit to Norway, South Korean President Moon Jae-in also condemned the attacks, which damaged the Norway-owned tanker.