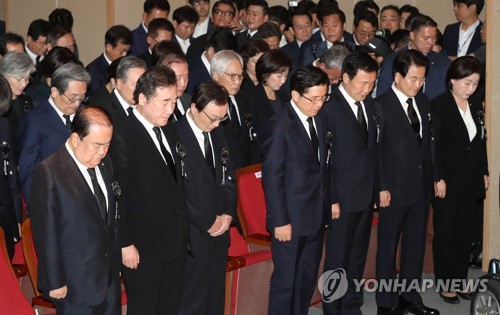 South Korea on Sunday commemorated the tenth anniversary of the death of former President Kim Dae-Jung.

Before the memorial event, President Moon Jae-in paid his respects to the late president in a posting on Twitter, recognizing Kim's dedication and contribution to the country's peace and democracy.

Moon also mentioned the 1998 declaration between Kim and then Japanese Prime Minister Keizo Obuchi on building a future-oriented partnership. In the declaration, Obuchi expressed "keen remorse" and apologized for "great damage and pain" that Japan imposed on South Koreans through its colonization of the peninsula.

Kim, a longtime opposition leader and pro-democracy fighter, led the country from 1998 to 2003. He is credited with leading the nation to tide over a financial crisis and launching inter-Korean peace efforts with his "sunshine policy," for which he won the Nobel Peace Prize in 2000.
Share
Print
List