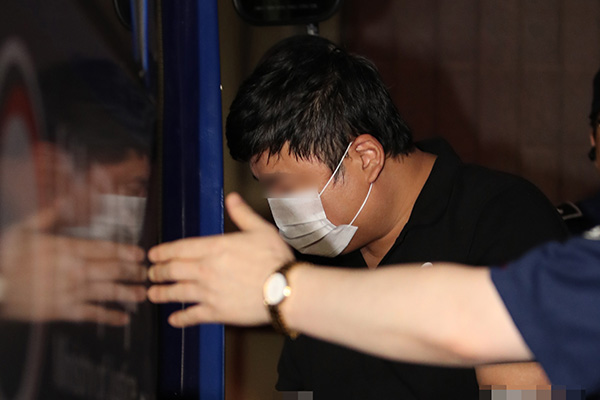 Prosecutors formally arrested a relative of Justice Minister Cho Kuk on Monday on charges linked to a suspicious private equity fund invested in by Cho's family.

The Seoul Central District Court issued an arrest warrant for the relative, a son of Cho's first cousin who is also surnamed Cho, on charges of violating the capital market law and abetting evidence destruction.

The court accepted the prosecution's request for the writ, saying the suspect may attempt to flee or destroy evidence.

It is the first arrest warrant issued for a member of Cho's family since a series of scandals surrounding the minister and his family emerged following his nomination to the post last month.

The relative, who has been detained since Saturday, is believed to be the de facto owner of Co-Link Private Equity, the operator of a fund in which the justice minister's wife and two children, as well as the minister’s brother-in-law and his two children, invested a combined one-point-four billion won.

He is accused of rigging stock prices and embezzling billions of won from companies invested in by Co-Link.

The prosecution told KBS that the relative admitted he received hundreds of millions of won from Minister Cho's wife, Chung Kyung-shim, to set up Co-Link under a borrowed name.

This would suggest that Chung was involved in the establishment of the fund in violation of the capital market law.

With the arrest of the key figure in the case, the prosecution is expected to summon Chung for questioning this week.
Share
Print
List