Minister: US, N. Korea Won't Be 'Negligent' about Impending Talks 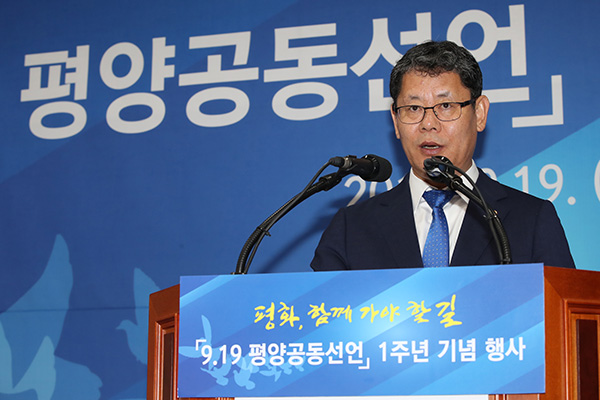 South Korea's minister in charge of inter-Korean affairs said neither the United States nor North Korea would be "negligent" about their denuclearization negotiations, which are likely to resume in the near future.

At a ceremony on Thursday marking the first anniversary of the third inter-Korean summit in Pyongyang, Unification Minister Kim Yeon-chul highlighted the need for productive and reasonable negotiations to take place based on sufficient trust between Washington and Pyongyang.

To that end, Kim said Seoul will closely cooperate with Washington and keep communication channels open with Pyongyang to ensure positive results come out of the expected negotiations.

On inter-Korean ties following the Pyongyang summit, Kim said cross-border military tensions on land, at sea and in the air have significantly decreased due to the implementation of agreements from the leaders' meeting.

Kim, however, didn't mention the prolonged impasse in inter-Korean dialogue and exchanges from the lack of progress in denuclearization talks.

Thursday's event, which was initially scheduled to be held at the border town of Paju, was scaled down and relocated following the outbreak of African swine fever at a nearby pig farm earlier this week.
Share
Print
List