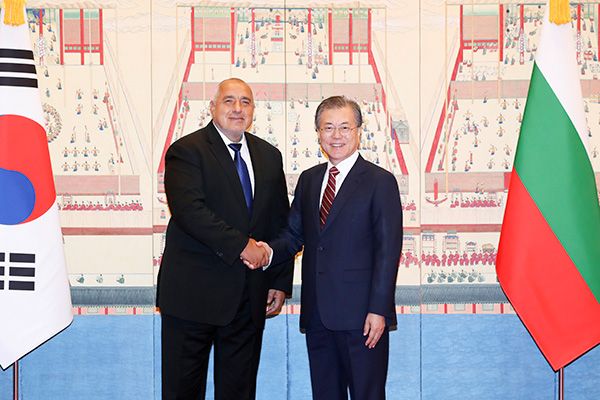 The leaders of South Korea and Bulgaria agreed to strengthen cooperation in nuclear energy, national defense as well as information and communications technology(ICT).

President Moon Jae-in and Bulgarian Prime Minister Boyko Borissov held a summit at the presidential office in Seoul on Friday morning, where they discussed various strategic partnerships between their nations.

Moon highly evaluated the leadership of Borissov, who is the first Bulgarian prime minister to make an official visit to South Korea. It comes ahead of next year’s 30th anniversary of Seoul and Sofia's official diplomatic ties.

Noting that bilateral trade and investment continues to increase in the face of a worldwide trend towards protectionism, the two leaders agreed to further expand economic cooperation.

Moon welcomed Bulgaria's decision to grant strategic investor status to South Korean businesses, and shared expectations that the move will boost investment in the country. He stressed that South Korea can become the best partner for Bulgaria in its nuclear power development and domestic defense system modernization.