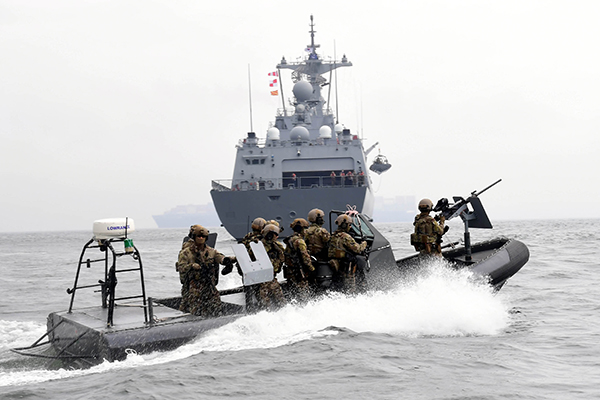 Two South Koreans and 14 other nationals are being held by Houthi rebels in Yemen.

According to the Foreign Ministry on Tuesday, a Saudi tugboat towing two South Korean drilling rigs, the Woongjin G-16 and Woongjin T-1100, was overtaken by armed assailants off the coast of Yemen’s Kamaran Island on Sunday local time.

A total of 16 people, including the two Koreans, were on board the vessels.

A South Korean skipper sent a message via a mobile communication device shortly after the ship was seized by assailants informing his company of the situation.

Houthi leaders are said to have informed the South Korean government that they will release the rigs if they are confirmed to be South Korean.

The tugboat was reportedly transporting the rigs from Saudi Arabia to Somalia. The rebel group claims the vessel trespassed into its territorial waters.

The South Korean anti-piracy Cheonghae unit, which was operating in the Gulf of Oman, was dispatched to the region on Monday.
Share
Print
List