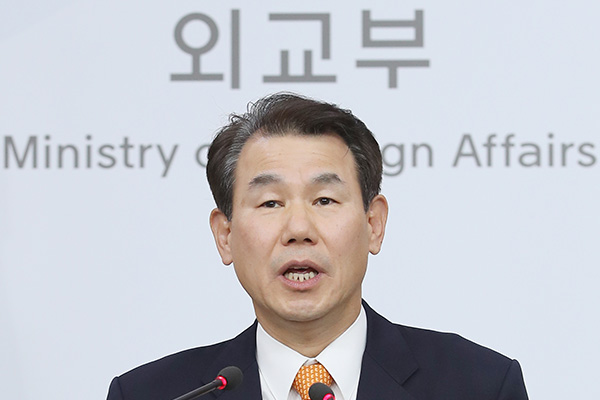 South Korea's chief negotiator for the defense cost-sharing talks between Seoul and Washington said that there is a considerable gap between Washington's overall proposal and the principles Seoul is pursuing in the negotiations.

At a press briefing in Seoul on Tuesday following the allies' abrupt suspension of negotiations, Jeong Eun-bo said the U.S. called for a drastic increase in South Korea's share of stationing American troops on the Korean Peninsula through the establishment of a new article.

South Korea maintained that the cost-sharing should be mutually acceptable within the framework of the Special Measures Agreement that the two sides have agreed on over the last 28 years.

Jeong noted that the allies differ on both the size of Seoul's contribution and establishing new articles, which are closely linked.

The envoy added that Seoul plans to continue to exert all efforts to ensure that the cost-sharing is mutually acceptable.

Earlier in the day, U.S. negotiator James DeHart said the U.S. side called off Tuesday's meeting after deciding that the South failed to respond to Washington's request for "fair and equitable burden sharing."
Share
Print
List