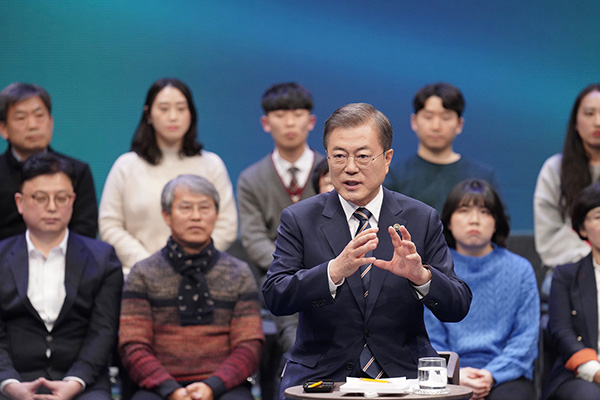 President Moon Jae-in said that an independent agency the government is seeking to create to investigate illegalities involving high-profile public figures is also necessary to rein in excessive prosecutorial power.

Moon expressed his views on the matter Tuesday night during a televised question and answer session with the public.

During the 100-minute-long talk aired live via MBC, the president apologized to the public again over the controversies surrounding former Justice Minister Cho Kuk, saying that despite his intention to appoint Cho to the post, he feels sorry for causing public concern.

However, he defended the former minister’s unfinished mandate to reform the prosecution and said that it was fortunate that the controversies eventually shed light on the importance of the issue.

Noting that the politicization of the prosecution has impeded justice from prevailing in the nation, Moon called for a rebirth of the legal enforcement agency so that it serves democracy and the public.

The president added that the establishment of an agency to probe corruption by high-ranking officials can be one way of keeping in check possible abuses of power by the prosecution.

He dismissed suspicions that the agency is aimed to suppress the president’s political opponents, arguing that those subject to the agency’s oversight are likely to be government officials or ruling party members.
Share
Print
List