Moon: 3rd N. Korea-US Summit Will Be Productive If Held 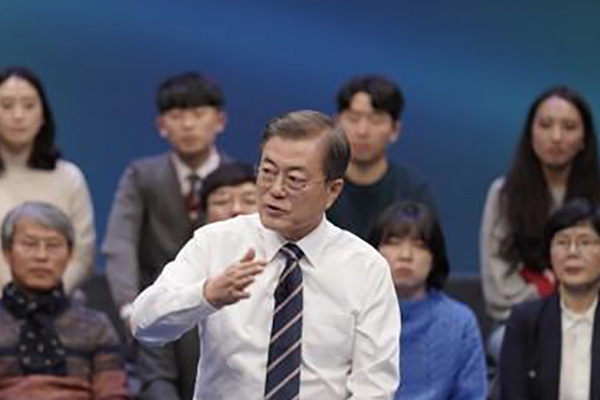 President Moon Jae-in said that a fresh summit between the U.S. and North Korea, if realized, will produce an outcome.

Moon expressed his optimism during a televised question and answer session with the public on Tuesday night.

He said that efforts to arrange a third summit for the U.S. and North Korean leaders within this year are continuously being made. Expressing his confidence about the summit’s potential productivity, the South Korean leader added that the prospective event will also create more room to maneuver in inter-Korean relations.

Noting the easing of tensions on the Korean Peninsula during his term, the president said the current phase of dialogue among the involved parties should continue despite the obstacles.

However, he stressed the importance of trilateral security cooperation between Seoul, Washington and Tokyo, and ensured that the Seoul government will cooperate with Tokyo as much as it can and will try to avoid the termination of the deal until the last moment.

He stressed that even if the pact is terminated, South Korea will continue its security cooperation with Japan.
Share
Print
List