US Defense Chief: S. Korea 'Can and Should Contribute More' 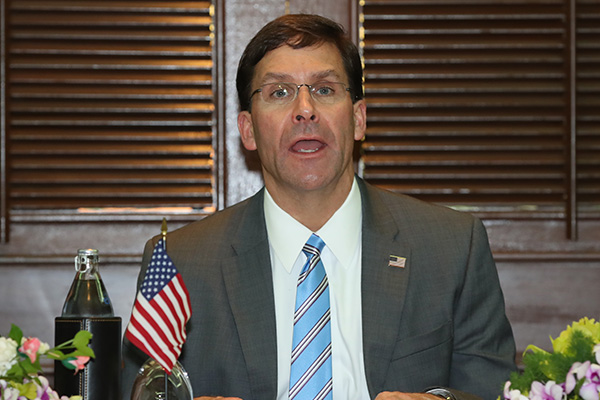 Anchor: The top U.S. defense official stepped up the pressure against South Korea in the ongoing debate between the two over defense cost contributions. Calling South Korea a rich country, Defense Secretary Mark Esper said Seoul can and should contribute more for the upkeep of U.S. troops in the country.
Park Jong-hong has this report.

Report: U.S. Secretary of Defense Mark Esper once again pressed South Korea to pay more for the cost of stationing U.S. troops in the country.

[Soundbite: U.S. Defense Secretary Mark Esper]
“South Korea is a wealthy country. They can and should contribute more and beyond that I will leave it to the State Department to work out the particulars.”

Speaking to reporters in the Philippines on Tuesday, Esper reiterated remarks he made last week while visiting Seoul.

But the Pentagon chief stopped short of speculating whether the U.S. would consider reducing or withdrawing U.S. troops from the Korean Peninsula if a deal is not reached before the end of the year.

Esper said his priority is to maintain the highest state of readiness to deter any "bad behavior" by North Korea.

[Soundbite: U.S. Defense Secretary Mark Esper]
“My challenge is to make sure that I, along with my counterpart Mr. Jeong and our respective chairmen, General Milley, General Abrams, and then on his side General Park, to make sure we maintain the highest state of readiness so that we’re prepared to deter North Korean bad behavior, and if that fails we’re prepared to fight tonight.”

The U.S. is reportedly seeking a roughly 500 percent increase in Seoul's contribution to costs associated with maintaining troops in-country as well deploying strategic assets. Accordingly, South Korea would pay some five billion dollars, significantly more than the 870 million dollars for this year.

On Tuesday, a third round of defense cost negotiations broke down after less than two hours, with neither side apparently able to close the gap between their respective positions.