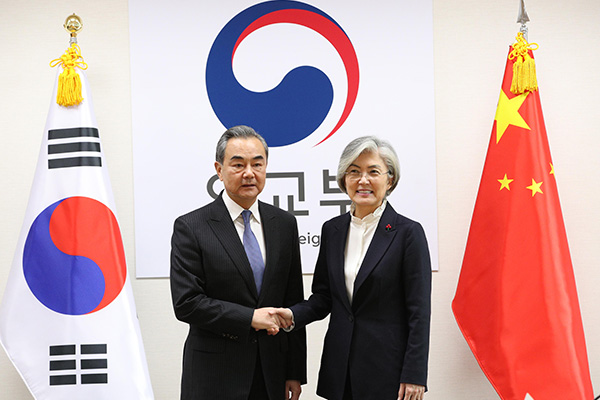 Kang opened the talks on Wednesday, addressing the significance of the meeting, which came after disputes over South Korea's deployment of the American THAAD missile system on the Korean Peninsula.

With Kang hoping for productive discussions on their cooperation for the denuclearization of North Korea, Wang Yi noted that the two sides must work together to play constructive roles for regional peace and security.

Wang also stressed that the biggest threat to global security is unilateralism, noting that China will defend the multilateral trade system together with countries including South Korea.

At the bilateral talks on Wednesday afternoon, the two diplomats were expected to have discussed the agenda for an upcoming Seoul-Beijing-Tokyo summit in China later this month, a potential visit to South Korea by Chinese President Xi Jinping and the North Korea nuclear issue.

Wang was also expected to have requested that South Korea not host U.S. intermediate-range missiles.

Washington has been exploring such possibilities after withdrawing from a Cold War-era arms control pact with Russia in February.