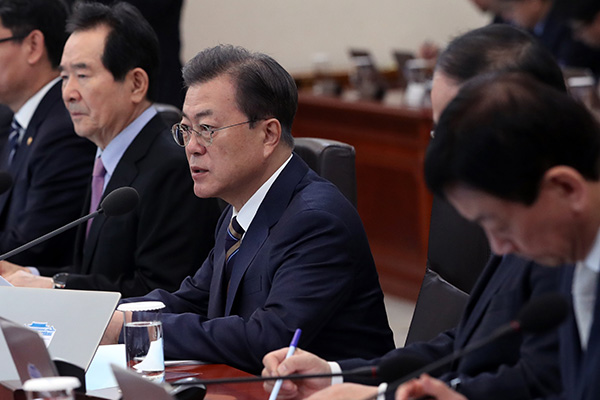 Anchor: Amid rising concerns over the economic fallout from the new coronavirus outbreak, President Moon Jae-in ordered his Cabinet to be creative in actively seeking measures to minimize the impact on the domestic economy.
Choi You Sun reports.

While exerting all-out efforts toward preventing further spread of the virus, Moon ordered his Cabinet to take stern measures against the economic fallout, with a notion that the country is under an "emergency economic situation."

Assessing that the current situation is more serious than many consider it to be, the president said the country is expected to take a hit from China's economic doldrums, citing visible effects on domestic supply chains and production linked to China.

Moon said Cabinet approval for use of the government's emergency funds during the meeting should be just the beginning, adding there should be no restrictions in addressing emergency economic situations.

In particular, the president called for a package of support measures to minimize the impact on domestic businesses, such as financial aid and tax breaks for small to medium-sized enterprises(SMEs) and small business owners.

In a bid to revitalize regional economies, Moon again urged officials not to be afraid of thinking outside the box in actively seeking various support measures.

He asked the South Korean people to have faith in the government's quarantine efforts and to return to their normal economic activities.

Moon's resolve to minimize the economic fallout from the virus' outbreak comes as he had pledged to bring a notable change in the domestic economy and to improve people's livelihoods amid signs of recovery at home and abroad.

Stressing that time is of the essence in implementing policies, Moon urged the National Assembly to do its part in helping the country overcome the current economic crisis.
Choi You Sun, KBS World Radio News.
Share
Print
List