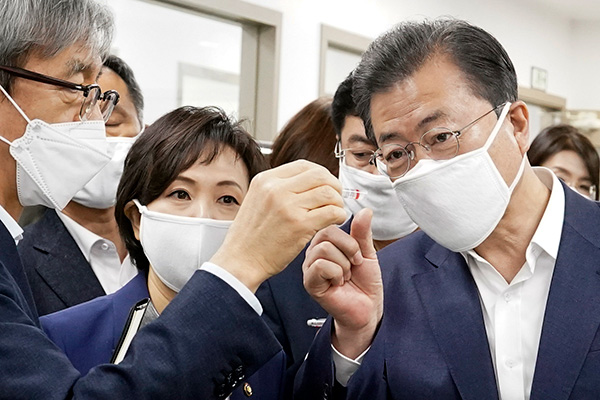 Moon made the comment Wednesday during a visit to local biotech company Seegene, one of the leading manufacturers of coronavirus testing kits. He said U.S. President Donald Trump requested an emergency delivery of testing kits and other medical supplies during their phone conversation the previous day.

Moon also stressed the government's active support for local developers so they can export their testing kits.

Referring to the recent praise South Korea received from the World Health Organization(WHO) as a model case for its COVID-19 response, Moon said he expected test developers to play a key role in international coordination to eradicate the virus.

He also emphasized that early detection of patients is just the start of the process to combat the fast-spreading novel coronavirus. Moon attributed the country's success so far not only to quick testing and quarantine measures, but also the precision of its test results, which he said were the highest in the world.
Share
Print
List