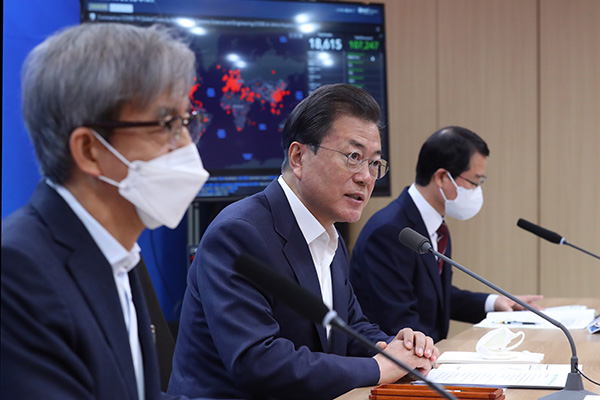 President Moon Jae-in's approval rating is back in the 50-percent range, reaching its highest level in 16 months.

According to a poll conducted by Realmeter on more than 15-hundred voters nationwide from Monday to Wednesday, Moon's approval rating rose three-point-two percentage points from last week to 52-point-five percent. Thirty-three percent even said the president was doing a very good job.

It marks the highest level since November 2018 when his approval rating was at 53-point-seven percent. It's also the first time in about seven months for the positive rating to surpass 50 percent.

Realmeter said the favorable assessment of the government's response to COVID-19 likely boosted support for Moon. His approval rating rose across all age groups with the exception of those in their 30s.

The poll commissioned by local broadcaster TBS has a 95 percent confidence level with a margin of error of plus or minus two and a half percentage points.
Share
Print
List