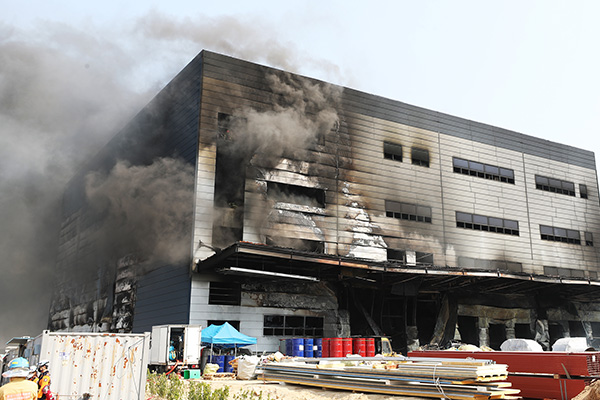 At least 38 people have died Wednesday  in a massive fire that broke out at a warehouse construction site in the city of Icheon in Gyeonggi Province.

According to the National Fire Agency, as of 7:00 a.m. Thursday, at least ten others were injured, including one in serious condition.

Fire authorities said the blaze started at the construction site located in Icheon's Moga-myeon area at 1:32 p.m. Wednesday, where 78 people from nine companies were working.

The main blaze was extinguished some three hours later, with the remaining embers completely put out by 6:42 p.m. More than 150 firefighters from half a dozen fire stations in region responded to the accident.

The four-story building with two basement floors was around 85 percent complete with construction scheduled to be finalized by late June.

The fire was presumed to have started on the second underground floor where a cargo elevator was being installed.

Authorities said a strong explosion likely started the fire and that inflammable materials such as urethane foam used in construction work may have contributed to rapid flame spread. An investigation is underway.

Prime Minister Chung Sye-kyun headed to the site of the accident immediately after he presided over a coronavirus quarantine-related meeting in Seoul.
Share
Print
List