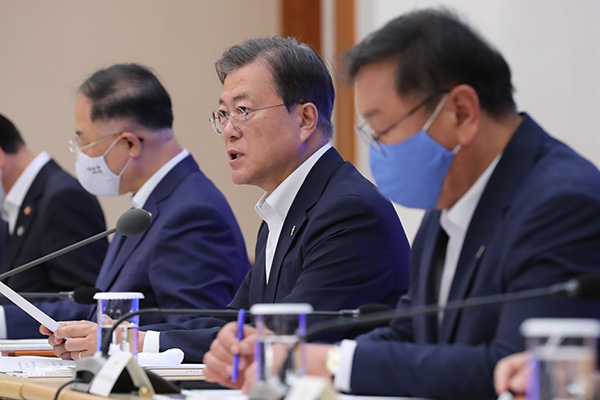 Anchor: In its latest packages of measures to cushion the economic impact of COVID-19, the Moon Jae-in administration has announced a 76-trillion-won Korean New Deal initiative designed to create jobs through digitization and green growth projects.
Choi You Sun has the details.

Report: At an emergency economic meeting led by President Moon Jae-in on Monday, the government decided to inject 76 trillion won into a fresh set of economic measures dubbed the "Korean New Deal" over the next five years.

The project is aimed at helping the nation overcome the fallout from the COVID-19 pandemic and to secure new growth engines in the post-coronavirus era.

The scheme will focus on digitalization and green growth, through which the Moon administration plans to create some 550-thousand new jobs by 2022.

Under the green growth part of the initiative, public housing, daycare facilities and public health centers will be refurbished with high-efficiency insulation and ventilation, and smart grids will be set up for public water and electricity supplies.

Various tax incentives were also announced such as abolishing a one-million-won cap on consumption tax cuts for car buyers and expanding tax credits for facility investment by businesses.