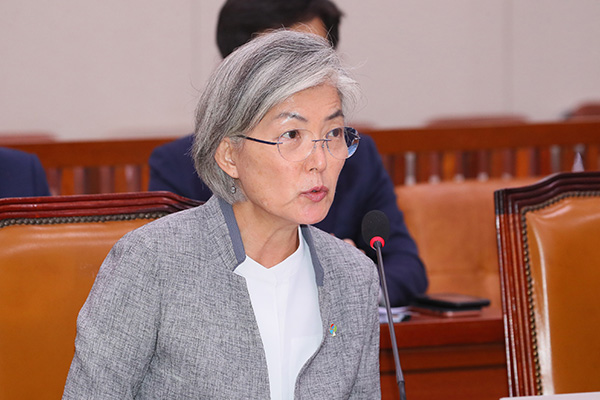 Foreign Minister Kang Kyung-wha has vowed to continue diplomatic efforts on all fronts to facilitate North Korea's return to dialogue.

In a press conference at the Foreign Ministry Thursday, Seoul's top diplomat said North Korea has stopped aggravating the situation on the Korean Peninsula. However, South Korea will focus on managing peninsula affairs and not lower its guard.

She said Seoul will work to continue its dialogue momentum between the two Koreas and between the U.S. and North Korea, while keeping tabs on related developments and maintaining a steadfast readiness posture.

Regarding President Moon Jae-in's efforts to realize a Trump-Kim summit before the U.S. presidential election, Kang said close communication on that continues at various levels between the U.S. and South Korea.

She also noted that Washington has reiterated its readiness to resume dialogue with Pyongyang, as well as its willingness to take a "flexible position."

She said the although the Foreign Ministry and its U.S. counterpart believe the working group has been fairly effective, they are also aware that some South Koreans are worried it has hampered inter-Korean relations.
Share
Print
List