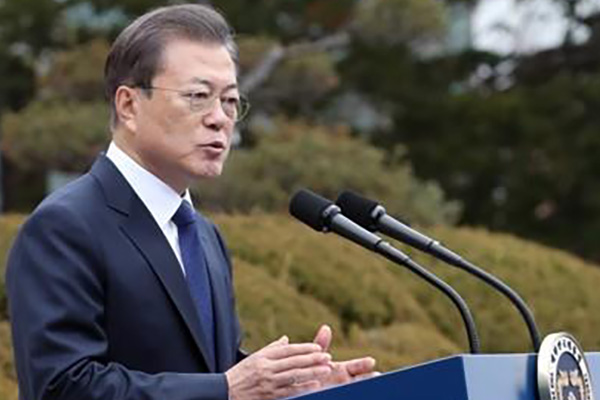 President Moon Jae-in is expected to call for bipartisan cooperation on the massive New Deal stimulus packages during his parliamentary speech slated for Thursday.

According to Presidential Spokesman Kang Min-seok on Wednesday, Moon was initially scheduled to visit a site related to the Korean New Deal projects on Thursday but decided instead to visit the National Assembly to facilitate the success of the 160 trillion won in stimulus projects he outlined the previous day.

The rival parties ended an impasse Tuesday night and agreed on the schedule for the July extraordinary parliamentary session, including the official opening ceremony for the 21st National Assembly that kicked off more than 40 days ago.

In the latest speech, Moon is also expected to seek the help of parliament in the government’s drive to root out real-estate speculation.

He is also likely touch upon a law concerning the creation of an independent agency to investigate corruption by high-ranking public figures. The law was set to take effect on Wednesday, but lawmakers have been unable to create even a committee to recommend the head of the new agency.

It will be the ninth time under the current constitution amended in 1987 that parliament opens with a presidential speech. Moon made an administrative policy speech at the Assembly on October 22 of last year.
Share
Print
List