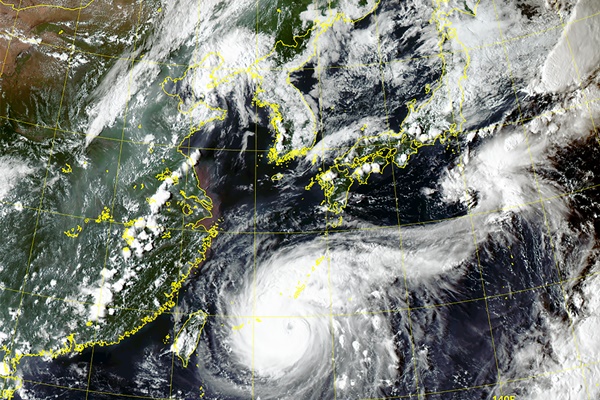 South Korea's state weather agency, which came under fire after failing to predict a record-long monsoon season this summer, is being scrutinized regarding its forecast for Typhoon Maysak's travel route.

The Korea Meteorological Administration(KMA) expects the typhoon to travel through waters east of Jeju Island Wednesday night, before landing along the southern coast of South Gyeongsang Province, specifically between Geoje and Busan, early Thursday.

The KMA predicts Maysak will depart from the Korean Peninsula into the central part of the East Sea Thursday morning, then make landfall in North Korea, before ceasing in China.

According to the KMA's prediction, Maysak will travel on a similar route as Typhoon Maemi in 2003, which caused the second-largest amount of property damage by a typhoon in the country.

The U.S. Joint Typhoon Warning Center(JTWC), however, forecast late Tuesday that Maysak will likely land between the southwestern city of Yeosu and the southeastern county of Namhae, then travel up through the central region towards North Korea.

Japan's weather agency predicted on Wednesday that the typhoon will likely land between South Jeolla and South Gyeongsang provinces, before traveling into and then through the East Sea.
Share
Print
List