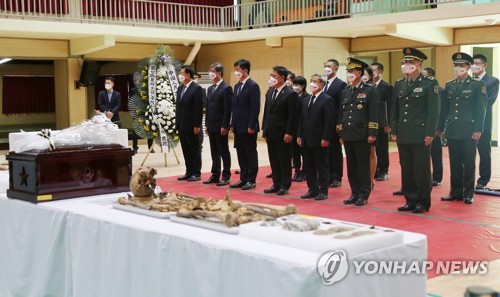 South Korea has repatriated 117 sets of the remains of Chinese troops killed during the Korean War.

According to Seoul's Defense Ministry, South Korea and China held a ceremony on Sunday morning at Incheon International Airport to mark the seventh such repatriation.

In the ceremony, Vice Foreign Minister Choi Jong-kun expressed hope that the bilateral relationship will further develop through the repatriation, calling for Beijing's support and cooperation in efforts to produce tangible progress in the Korean Peninsula peace process.

Most of the remains repatriated Sunday were reportedly excavated last year from Arrowhead Ridge, a key battlefield during the Korean War inside the Demilitarized Zone separating the two Koreas.

The government plans to continue to repatriate the remains of Chinese troops once they are excavated.
Share
Print
List