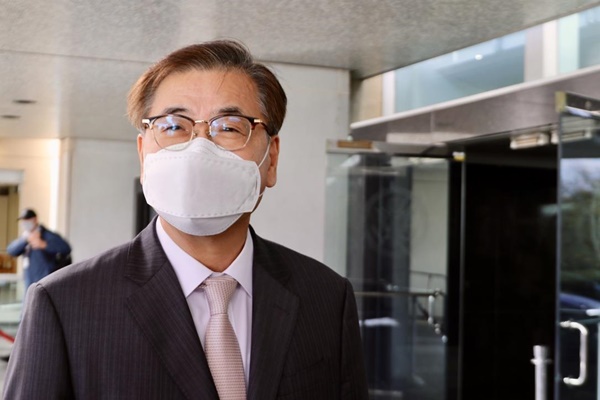 Anchor: President Moon Jae-in's top security aide Suh Hoon held talks with U.S. Secretary of State Mike Pompeo in Washington. While not sharing many details of the meeting or his four-day trip, Suh clarified that Moon's renewed push to declare a formal end to the Korean War should go hand-in-hand with North Korea's denuclearization.
Choi You Sun reports.

Report: South Korea's National Security Adviser Suh Hoon, who is visiting Washington this week, said it is common sense that declaring a formal end to the Korean War can not be separated from North Korea's denuclearization.

After his closed-door meeting with U.S. Secretary of State Mike Pompeo on Thursday, Suh emphasized that Seoul and Washington do not differ on that issue in the wake of President Moon Jae-in's renewed push for the end-of-war declaration.

[Sound bite: S. Korea's National Security Adviser Suh Hoon (Korean/English translation)]
"The end-of-war declaration issue is nothing new. That has always been on the negotiating table and South Korea and the U.S. cannot have differing views. The issue at hand would be about the timing of the declaration in the denuclearization process or how closely linked the two should be. It would be common sense that the two can not be separated."

Suh's remarks indicate that the end-of-war declaration is being considered as part of the denuclearization process and that Seoul and Washington are on the same page.

The adviser, meanwhile, denied speculation that he was visiting the U.S. less than three weeks before the upcoming presidential election to revive the momentum for dialogue with North Korea.

[Sound bite: S. Korea's National Security Adviser Suh Hoon (Korean/English translation)]
"We should consider the fact that there are less than 20 days left until the November 3rd Election. The South Korea-U.S. relations should continue regardless of the presidential election or a change in the administration. So it wouldn't be right to say that the trip was arranged in consideration of the election."

While Suh declined to give more details, it's speculated that he exchanged views on the security situation following the North's recent military parade, as well as pending alliance issues, such as the delayed renewal of a cost-sharing deal.