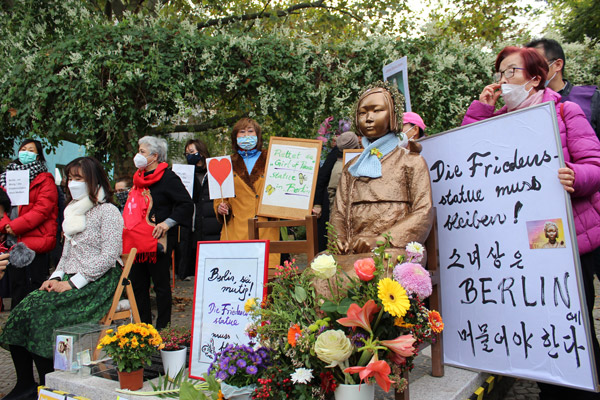 Japan's Sankei Shimbun newspaper reports that lawmakers of the ruling Liberal Democratic Party have conveyed support to local authorities of a Berlin district regarding the dismantlement of a statue that commemorates victims of Japan's wartime sexual slavery.

The lawmakers have reportedly sent letters to the administrative head and local assembly chief of the borough of Mitte in Berlin, expressing support for the district to revoke a permit on the statue.

In the statement, they argued the statue is not a general representation of sexual violence victims but only targets Japan, hurting its integrity.

They warned that if the statue remains, it can be problematic in bilateral ties and adversely affect the favorable relationship between Japan and Germany.

The statue was erected in late September but the Mitte district office issued an order last month for it to be taken down, after Japan protested the installation.

Then a local civic group filed a complaint with the court requesting a suspension of the order.

Authorities have then taken a step back, withholding a decision on the fate of the statue saying they will wait for the court to decide.
Share
Print
List