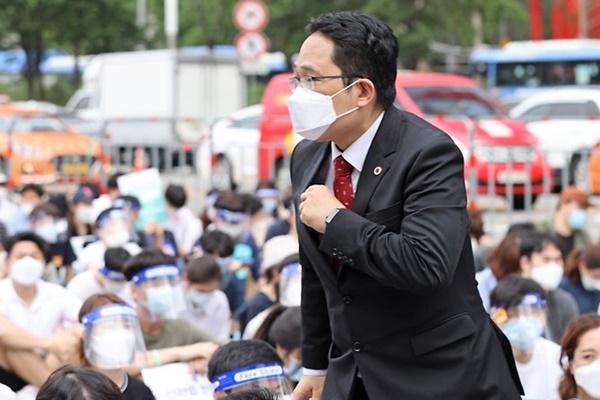 Anchor: South Korea's largest doctors' association has threatened to stage a general strike in protest of the ruling camp's push to revoke the licenses of doctors convicted of felonies. In return, the ruling Democratic Party(DP) has warned of strong government action should the strike take place.
Choi You Sun reports.

Report: The Korean Medical Association(KMA), which represents mostly doctors in private practice, has threatened a general strike, should revisions to a law on medical licenses move forward at the National Assembly.

The ruling Democratic Party(DP)-proposed revisions, which recently passed the parliamentary health committee, aim to temporarily revoke the licenses of doctors sentenced to prison for serious crimes, such as murder and sexual violence.

The medical licenses cannot be reinstated for five years after a sentence is completed, or two years for those handed a suspended sentence.

KMA President Choi Dae-zip on Sunday warned that the strike will seriously disrupt the nation's COVID-19 diagnosis, treatment and vaccination program that is set to begin on Friday.

Claiming that the bill unconstitutionally infringes on the freedom of occupation, the KMA argued that it should be granted the right to discipline its members.

The DP, for its part, warned on Monday that it would take strong action should the strike happen, with DP leader Lee Nak-yon stressing that the doctors' group should be more ethical and socially responsible than others.

DP Rep. Kim Sung-joo, a senior member on the parliamentary committee, said his party can not understand why the KMA is protesting the regulations which already apply to other professions, such as lawyers, accountants and lawmakers.

To that end, the KMA issued a statement, arguing that each profession serves its own purpose and should be regulated under separate laws. However, it said it does not oppose the bill entirely and suggested it work with parliament on the parts of the bill it agrees on.
Choi You Sun, KBS World Radio News.
Share
Print
List