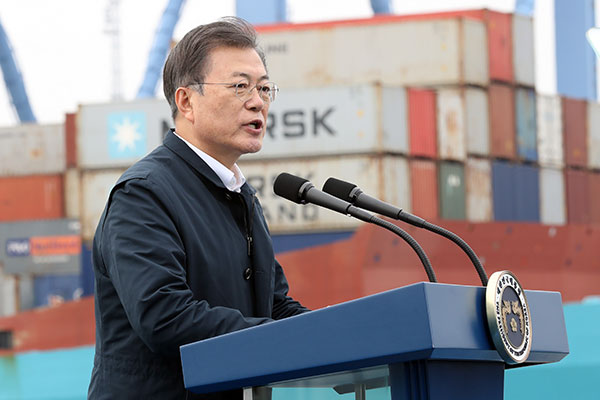 President Moon Jae-in on Thursday visited the southern port city of Busan to take part in a briefing on a mega city under construction in the region related to the Korean New Deal.

The envisioned Southeastern Mega City will forge an economic bloc with a total of eight million residents in Busan, Ulsan and South Gyeongsang Province.

The presidential office and the government anticipate the plan would boost not only the population but also gross product in the region.

However, the visit drew scathing criticism from the main opposition People Power Party(PPP), which claimed that it is clearly meddling in campaigning ahead of the mayoral by-election in April.

PPP floor leader Ju Ho-young said there should be no mistake that the president's point-blank intervention in campaigning is grounds for impeachment. He continued that the party will review the allegations.
Share
Print
List