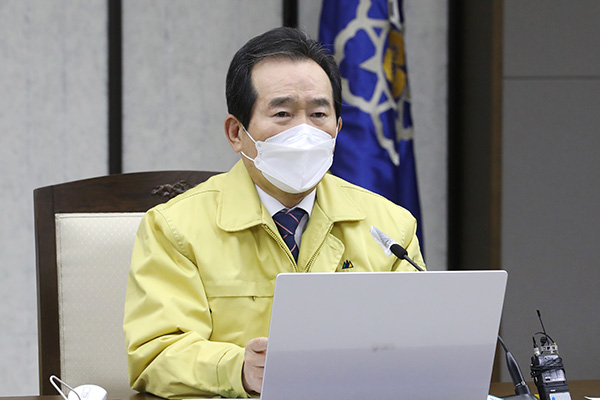 In a conversation session with reporters arranged at the Government Complex in Seoul and online Thursday, Chung was asked to comment on Yoon tendering his resignation in protest of the ruling camp's bid to fully separate the prosecution’s rights to investigate and indict.

The prime minister said the move, which he called “very regrettable,” was unexpected, adding that Yoon had no prior discussion on it with the government.

Regarding speculations the top prosecutor will seek a political career, Chung declined to comment in detail, but said Yoon will not be blamed for seeking to do so or for seeking any other position as a civilian.

The prime minister, however, refuted Yoon’s criticism that the ruling bloc is destroying the spirit of the Constitution and rule of law, saying the government is doing its best to safeguard them.

The top prosecutor expressed his intent to resign earlier in the day, saying he can no longer watch what he called the collapse of  justice and common sense.

He particularly directed his salvo at the ongoing push by the government and ruling Democratic Party to create a new and separate investigative agency on grave crimes under the Justice Ministry.

The prosecution has already seen part of its investigative authority diverted to the police after a series of bills were passed in parliament and the Corruption Investigation Office for High-ranking Officials(CIO) was launched in January.
Share
Print
List