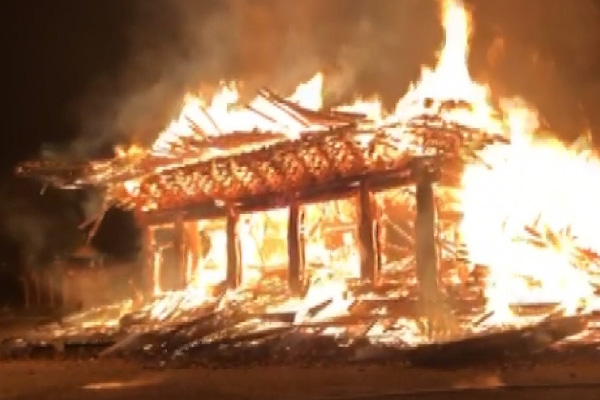 A fire has devastated a Buddhist temple in North Jeolla Province inflicting property damage worth nearly one-point-eight billion won, according to fire officials.

The blaze began around 7 p.m. Friday at Naejang Temple and completely destroyed its main hall, the Daewungjeon building. The flames were put out some two and a half hours later and no casualties were reported.

Police and fire authorities will inspect the site Saturday and conduct a joint survey with the National Forensic Service on Monday to determine what caused the fire.

The police apprehended a 53-year-old monk at the scene.

According to the Jeongeup Police Station investigating the case, the suspect called the police around the time the fire started and confessed that he had started the fire.

He is known to have used flammable materials in the arson attack while under the influence of alcohol and reportedly told police that he had a feud with other monks at the temple.

The Daewungjeon Hall was previously destroyed in a 2012 fire believed to have been caused by a short circuit. The building was restored in 2015.
Share
Print
List