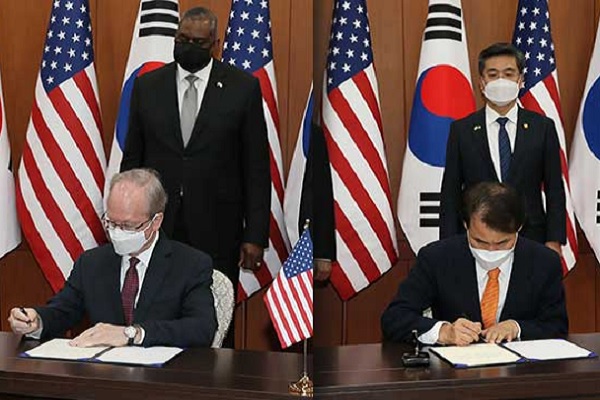 South Korea and the United States have formally signed a defense cost-sharing deal for the upkeep of U.S. forces stationed in the country.

First Vice Foreign Minister Choi Jong-kun and Rob Rapson, charge d'affaires at the U.S. Embassy in Seoul, inked the Special Measures Agreement, or SMA, at a ceremony on Thursday at the Foreign Ministry.

Last month, both countries agreed to increase South Korea’s portion by 13-point-nine percent from 2019. Seoul’s contribution for the following four years will be based on increases in national defense costs.

Under the SMA, Seoul is to pay one-point-05 billion U.S. dollars for the upkeep of the 28-thousand-500-strong U.S. Forces Korea this year. The deal, which runs to 2025, now awaits ratification at the National Assembly.

The latest SMA comes after a year and a half of grueling negotiations that raised fears that a prolonged tug of war could undercut the bilateral alliance in the face of lingering North Korean military threats.
Share
Print
List