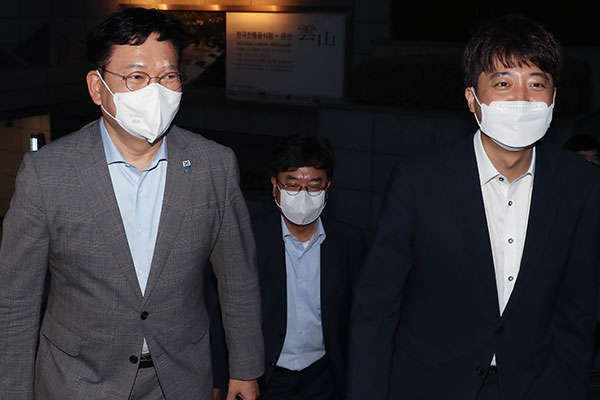 Leaders of the rival parties have clashed over the Supreme Court’s conviction of South Gyeongsang Gov. Kim Kyoung-soo over his role in online opinion rigging ahead of the 2017 presidential election.

Song said that as the ruling party leader, he respects the top court’s decision and feels regrettable and apologetic over the rigging case.

Although denying the presidential office’s direct involvement, Song said the top office needs to apologize over the case given President Moon Jae-in’s previous stance on public opinion rigging schemes by the National Intelligence Service under the Lee Myung-bak administration.

Moon, who was the leader of then main opposition New Politics Alliance for Democracy, the predecessor of the DP, demanded the Park Geun-hye administration apologize over the rigging scandal that took place when her predecessor was in power.

Regarding Kim’s alleged offer of a consul general post in Sendai, Japan, for an associate of the blogger, PPP chief Lee criticized the Moon administration, calling it a modern-day practice of buying and selling government posts.

DP leader Song emphasized that politicians on both sides of the aisle should renounce such practices but stressed the alleged offer did not take place.
Share
Print
List