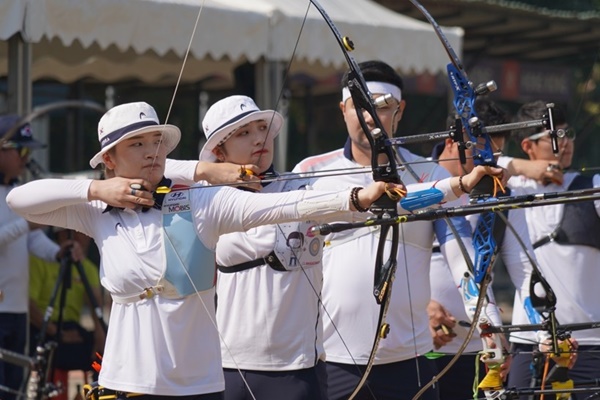 The three-member team consisting of Kang Chae-young, Jang Min-hee and An San will face Italy in the quarterfinals of the Tokyo Olympics set to begin at Yumenoshima Final Field at around 2 p.m. The final is scheduled to begin at 4:40 p.m.

An won the mixed team event on Saturday with her partner Kim Je-deok, bringing South Korea’s first gold medal of the Tokyo Olympics.

South Korea also guns for up to two gold medals in taekwondo on Day 3. Lee Dae-hoon, who won a silver medal in the 2012 London Games and a bronze in the 2016 Rio de Janeiro Games, will begin the Round of 16 competition in the men’s 68-kilogram event against Ulugbek Rashitov of Uzbekistan.

Lee Ah-reum, who is the nation’s gold medal hopeful in the women’s 57-kilogram category, will begin her Sunday campaign against Lo Chia-ling of Chinese Taipei in the Round of 16.

Fencing will be another notable sport to draw South Koreans’ attention in the day with Park Sang-young seeking to defend his Olympic title in the men’s epee individual event. The final is slated for 9:15 p.m.

Meanwhile, South Korea men’s football team will face Romania at 8 p.m. on Sunday in their second group B match. They lost to New Zealand 1-0 on Thursday.
Share
Print
List