S. Korea Picks up One Gold, One Bronze Medals on Day 3 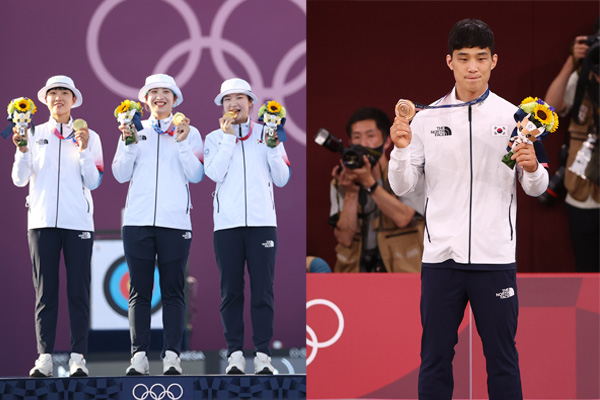 South Korea added one gold medal in archery and a bronze in judo at the Tokyo Olympics on Sunday.

Kang Chae-young, Jang Min-hee and An San-defeated the Russian Olympic Committee team 6-0 during the finals of the women’s team event at Yumenoshima Final Field in Tokyo. It extended South Korea’s winning streak in the event to the ninth Olympics.

South Korean judoka Ahn Baul won a bronze medal in the men’s 66 kilogram event after losing to Vahza Margvelashvili of Georgia in the semifinals earlier in the day.

Ahn beat world’s first-ranked Manuel Lombardo of Italy by an ippon in the bronze medal decider at Nippon Budokan, claiming a medal at his second consecutive Olympics. He won silver in the same class at the 2016 Rio de Janeiro Games.

South Korean teen swimmer Hwang Sun-woo advanced to the semifinals in the men’s 200-meter freestyle with the fastest record among the 39 athletes who competed in the Sunday heats at Tokyo Aquatics Centre. His time, 1:44.62, is also a new national record. The previous record of 1:44.80 was set by Park Tae-hwan when he won the Guangzhou Asian Games in 2010.

The men’s football team thrashed Romania 4-0 in their second Group B match and leapfrogged into the group leadership on goal differential with all three other competitors in the group each recording a victory. New Zealand, who beat South Korea 1-0 on Thursday, lost to Honduras 3-2.

Korea, meanwhile, failed to win a gold medal in taekwondo for the second day in a row with hopefuls Lee Dae-hoon and Lee Ah-reum both losing in the Round of 16 in the men’s 68 kilogram and the women’s 57 kilogram events, respectively.

Team Korea will be gunning for medals in men’s team archery and fencing on day four Monday.
Share
Print
List