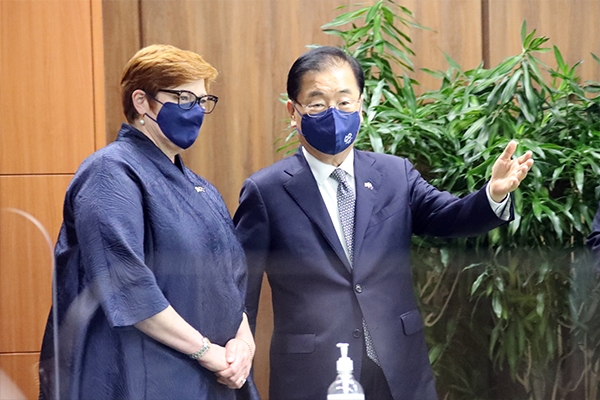 Chung made the remark on Monday in a news conference held after a two-plus-two meeting with South Korea and Australia’s foreign and defense ministers in Seoul.

The minister said the government, based on its cooperation with the U.S., is analyzing the intent behind the North’s latest tests.

He then said signs of the North resuming nuclear and missile activities demonstrate that engaging in dialogue and diplomacy with Pyongyang is urgent to address such issues.

Australian Foreign Minister Marise Payne said her country has made clear that it will thoroughly implement its own sanctions against the North as well as UN Security Council sanctions. Canberra will do this until Pyongyang takes clear measures to achieve denuclearization in a complete, verifiable and irreversible manner.
Share
Print
List