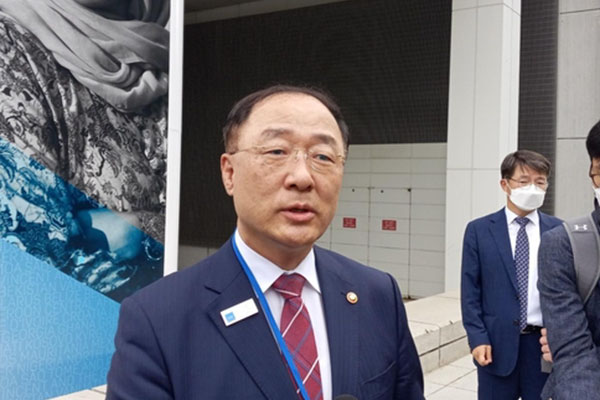 Finance Minister Hong Nam-ki said South Korea will continue to push for an expansionary fiscal policy next year during talks with the chief of the International Monetary Fund, Kristalina Georgieva, held in Washington Tuesday.

Hong is visiting the U.S. to attend the Group of 20 finance ministers meeting.

During talks, he said it's encouraging that the IMF maintained its growth outlook for the Korean economy and that Seoul is in the process of gradually normalizing fiscal policies.

The IMF chief said the global economy is continuing to recover its momentum this year. However, uncertainty remains high and uneven recoveries among countries may be prolonged.

As Minister Hong pointed to the limitations of traditional macroeconomic policies and asked for a more tailored advisory from the IMF, Georgieva agreed on the importance of a flexible approach in line with the changing environment.