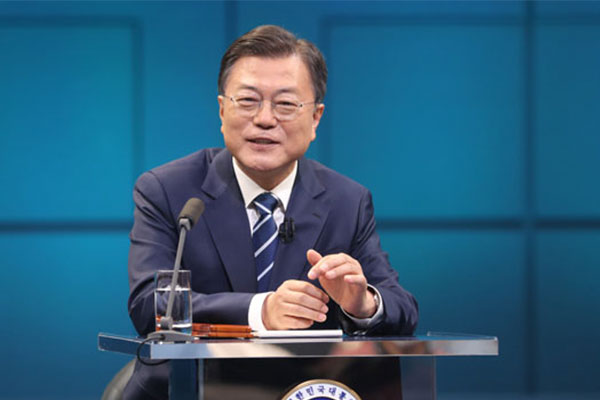 President Moon Jae-in once again identified real estate issues as the most regrettable aspect of his administration, adding in hindsight it would have been better had the government supplied more homes earlier.

Moon made the remark during a 100-minute town hall broadcast live by KBS on Sunday, in which he directly engaged with some 300 citizens participating online and in-person to ask questions on his major policies.

Moon noted the rising prices of homes are starting to ebb in intensity as the government pumps up supply. He said his administration will work until the end to resolve the issue of high property prices so it does not spill over to the next government.

Regarding COVID-19 treatment, the president said a contract has been signed for COVID-19 pills sufficient for 400-thousand people, which will be brought in in February at the latest.

He also said the government will lower the minimum age for COVID-19 vaccination if the vaccine proves safe and effective for children, noting that the United States has started inoculating children aged five to eleven.

President Moon recognized that though he has six months left in his term, he believes six months can be a long period of time. He pledged to remain focused until the end of his term.
Share
Print
List