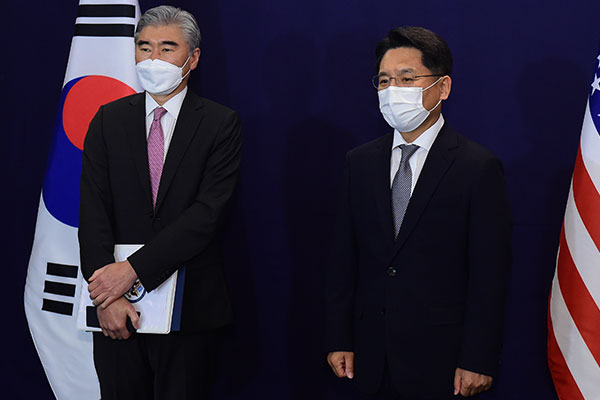 Noh Kyu-duk, special representative for Korean Peninsula peace and security affairs, and his American counterpart, Sung Kim, shared the view that it's imperative to prevent further exacerbating the current situation.

They agreed to continue cooperation with relevant parties to resume dialogue with North Korea.

The envoys have talked on the phone after each provocation and a mention of "deep concern" in their latest talks reflect how gravely they view the matter.

Despite the continued launches, the U.S. maintains a diplomatic approach while South Korea has indicated that more active gesture by the allies are necessary to bring Pyongyang back to the negotiating table.

According to South Korea's Joint Chiefs of Staff, the North fired two suspected short-range ballistic missiles toward the East Sea from the coastal city of Hamhung at 8 and 8:05 a.m. on Thursday, the sixth test this month.
Share
Print
List