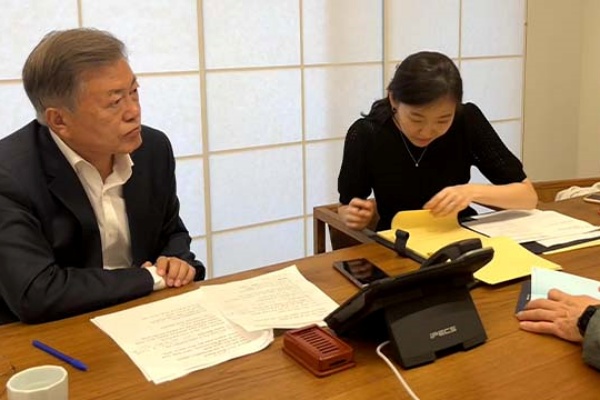 Former President Moon Jae-in and United States President Joe Biden spoke on the phone for about ten minutes on Saturday.

According to Rep. Yun Kun-young of the main opposition Democratic Party, Moon held the phone talks from 6:52 p.m. on Saturday at his private residence in Yangsan, South Gyeongsang Province.

During the phone conversation, Moon reportedly welcomed Biden's first trip to South Korea and said he was thankful for the call as he felt sorry that he did not have a chance to talk to Biden before his retirement.

Calling Moon a "good friend," President Biden reportedly said that he had a great memory of their first summit at the White House last year when they laid the historic foundation for the bolstering of the U.S.-South Korea alliance.

Moon expressed gratitude for Biden in selecting South Korea as the first leg of his Asia tour, calling it a move that displays the strong bilateral ties.

Biden reportedly hoped that he would meet Moon again and thanked him for his gift conveyed via the foreign ministry.
Share
Print
List