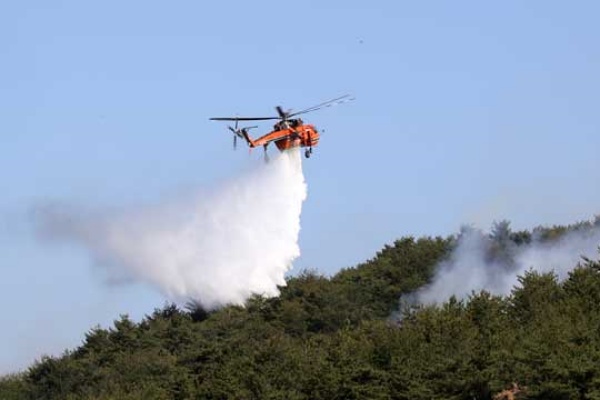 The main flames of a massive wildfire in the eastern coastal area of Uljin has been put out about 24 hours after the blaze started.

The Korea Forest Service (KFS) announced on Sunday morning that the main fire of the wildfire in Uljin County has been extinguished at 11:40 a.m.

The KFS, however, said it would maintain the highest Level 3 wildfire alert and continue efforts to completely extinguish the remaining fires, mobilizing ten helicopters and some 15-hundred people.

No casualties have been reported, and all the local residents who were forced to evacuate overnight returned home.

The blaze is estimated to have destroyed 145 hectares of forest and destroyed nine facilities. The burned areas are equivalent to the size of over 200 soccer fields.

The blaze started on a mountain in Uljin at around noon on Saturday and quickly spread due to strong winds.
Share
Print
List