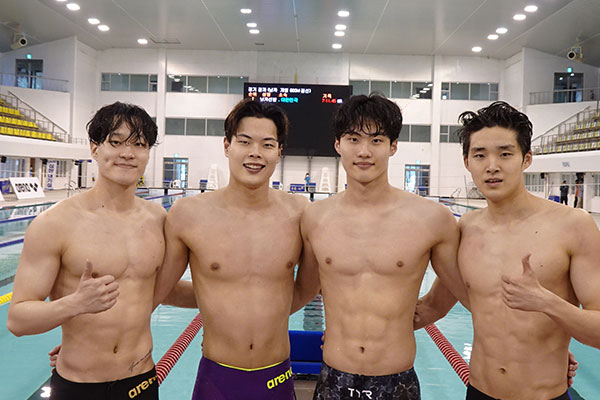 Team Korea posted a new national swimming record after coming in sixth in the final of the men's four-by-200 meter freestyle relay at the FINA World Championships in Budapest.

The four-member team, comprising Hwang Sun-woo, Kim Woo-min, Lee Yoo-yeon and Lee Ho-joon, finished sixth on Thursday with a record time of seven minutes and six-point-93 seconds, one-point-56 seconds faster than the previous national record. The team had set the previous record in the event's heat earlier in the day.

Thursday marked the first time South Korean swimmers advanced to the finals of a relay event in the world championships.

Team Korea crossed the finish line four seconds faster than China, which ranked eighth, raising the prospect that the team could meet its goal of winning a gold medal in relay events at the 19th Asian Games in Hangzhou, China.