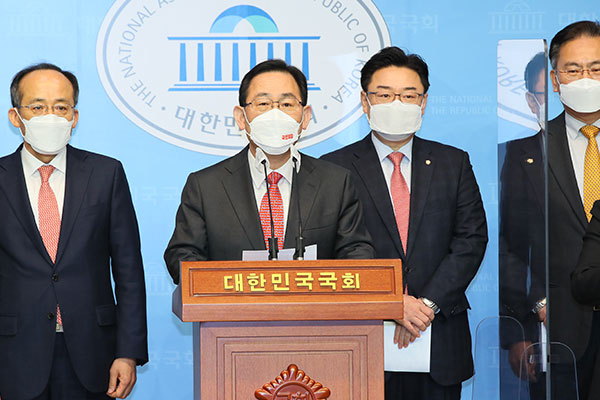 The ruling People Power Party(PPP) held a general meeting of its lawmakers on Tuesday and ratified a motion to appoint Rep. Joo Ho-young as the party's interim chief.

The party's floor spokespeople announced the conclusion reached during the 20-minute closed-door virtual meeting held at 2 p.m. with 73 of the PPP's 115 lawmakers in attendance.

Following the revision of party rules by the national committee earlier in the day, floor leader Kweon Seong-dong obtained the right as acting party chief to appoint an interim leader.

Immediately after the committee meeting, Kweon proposed the interim chief post to five-term lawmaker Joo, who reportedly accepted on the condition that fellow lawmakers supported the move.

If the motion is approved by the national committee when it reconvenes at 3:30 p.m., the launch of an emergency leadership committee led by Joo becomes finalized.

Floor spokesperson Yang Kum-hee emphasized the unanimous assent by all lawmakers in attendance during the meeting.
Share
Print
List