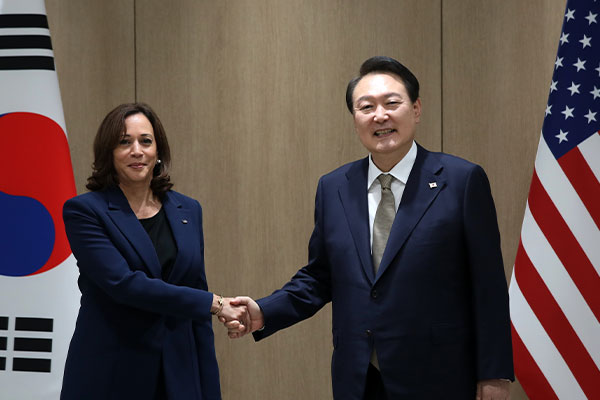 President Yoon Suk Yeol said the South Korea-U.S. alliance is advancing beyond the Korean Peninsula to become a global alliance not only militarily but also economically and technologically.

Meeting with U.S. Vice President Kamala Harris at his office on Thursday, Yoon hoped her visit would be another turning point as his administration strives to further develop the alliance to defend the freedom, security, and prosperity of the South Korean people.

Thanking Yoon for his continuing efforts to build on the enduring bilateral ties, Harris stressed that the alliance has been a linchpin of security and prosperity on the Korean Peninsula, in the Indo-Pacific region and around throughout the globe.

She said she is in the country to reinforce the strength of the alliance and the work of the two sides together.

During a closed-door discussion, Yoon and Harris reportedly exchanged views on Seoul's concerns over the exclusion of domestic electric vehicle manufacturers from benefits offered in the U.S. Inflation Reduction Act(IRA).

This is the first visit to South Korea by a U.S. vice president in more than four and a half years. Harris is set to wrap up her one-day trip after visiting the Demilitarized Zone(DMZ).
Share
Print
List