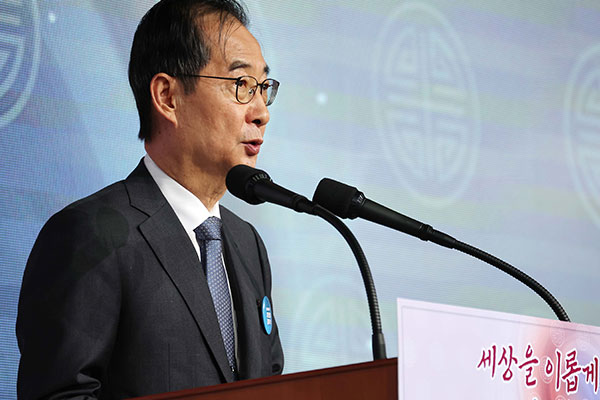 Prime minister Han Duck-soo has called upon South Korea to usher in a new era that benefits the international community as the world faces great change.

In a speech celebrating National Foundation Day on Monday, the prime minister said the nation should move forward in the spirit of the philosophy of Dangun, the founder of the first Korean kingdom, including “Hongik Ingan,” meaning "to broadly benefit the human world."

Han said now is the time for the people of the country to demonstrate once again the relentless will and perseverance that helped the nation overcome countless tribulations throughout history.

Saying that the global crisis cannot be resolved by the efforts of a single country, the prime minister vowed that South Korea will continue supporting international efforts against infectious diseases worldwide and the climate crisis while also expanding aid to developing countries.

Although South Korea is the world’s tenth-largest economy, he said, government-led growth strategies have inevitable limitations and called for fundamental improvement to place the private sector at the center of growth with support from the government through drastic regulatory reforms that promote creativity and innovation.

Han went on to address inequality and polarization, vowing to protect the socially vulnerable with funds secured from strengthened fiscal soundness of the government as well as an innovative welfare system utilizing technology such as artificial intelligence and big data.

He also promised the government will focus on easing the people's burden from inflation while listening and responding to the voices of local communities.
Share
Print
List