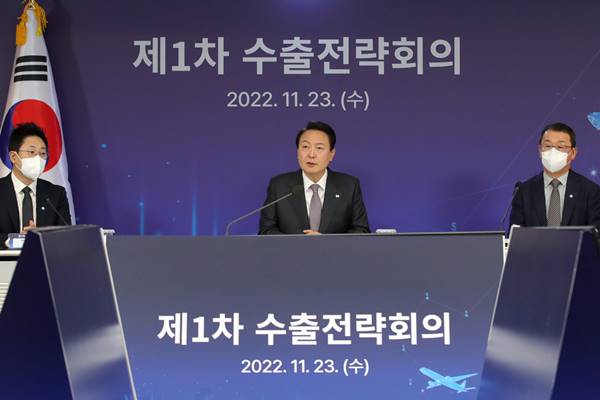 Presiding over an inaugural meeting dedicated to export strategies, President Yoon Suk Yeol on Wednesday announced his goal to turn South Korea into one of the world's top five export powerhouses.

During the meeting attended by 40 participants from the government and the private sector at the Korea Trade-Investment Promotion Agency, Yoon urged public officials to adjust all policies in line with expanding exports to climb from the expected sixth-place finish in outbound shipments this year.

Citing the war in Ukraine and the U.S.-China rivalry, Yoon said Korea should seize the complex global environment as an opportunity to become an export powerhouse and vowed to provide aggressive and preemptive government support.

He said that all areas and policies including industrial strategies and financial systems must be realigned toward the goal of boosting exports, adding that he will personally preside over future export strategy meetings and focus on export-related matters to the level of summit diplomacy.
Share
Print
List