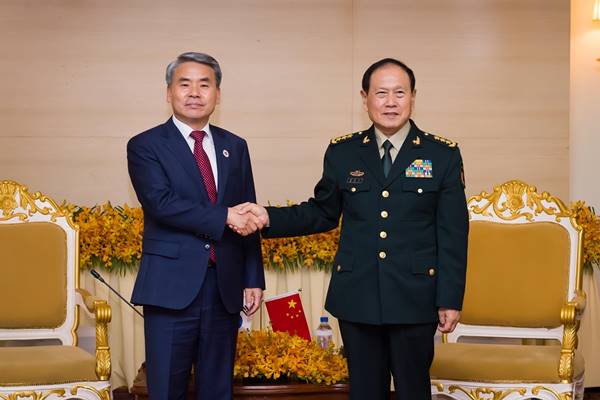 The defense chiefs of South Korea and China held talks on Wednesday to discuss nuclear and missile threats from North Korea.

According to Seoul's defense ministry, Minister Lee Jong-sup sat down for talks with his Chinese counterpart Wei Fenghe in Siem Reap, Cambodia, on the sidelines of the Association of Southeast Asian Nations Defense Ministers' Meeting-Plus.

In their first meeting since their talks in June on the margins of the Shangri-La Dialogue in Singapore, the two sides exchanged views on the security conditions of the Korean Peninsula and the region for about 70 minutes.

Minister Lee asked China to play a "constructive" role in convincing North Korea to realize that there is nothing to gain by advancing its nuclear and missile capabilities and to return to dialogue.

The Chinese defense chief said that China does not want instability and tensions to worsen on the peninsula, claiming that Beijing has continuously played an "active and constructive" role in pursuing stability in the area.

Regarding the North's claim that it has been advancing its nuclear and missile capabilities in response to joint South Korea-U.S. military exercises and U.S. threats to the regime, Lee stressed that the North is merely looking to blame others for its provocations.
Share
Print
List