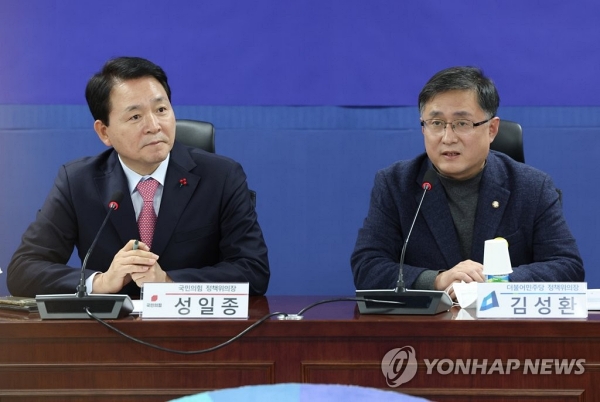 Rival parties will resume talks on Sunday on the government's budget proposal for next year, which missed the December 2 legal deadline for parliamentary passage.

Representatives Sung Il-jong and Lee Chul-gyu of the ruling People Power Party will sit down for talks with Representatives Kim Sung-hwan and Park Jeung of the main opposition Democratic Party at 4 p.m. at the National Assembly.

The lawmakers will hold negotiations on budget items that the two sides have yet to agree on.

The four-member council was formed after National Assembly Speaker Kim Jin-pyo held a meeting with the floor leaders of the two parties on Friday.

In the planned talks, the rival parties will focus on the discussion of budget items subject to cuts and increases and other contentious bills related to the budget.

If the council reaches an agreement by Monday, the budget bill will be immediately put to a vote in a parliamentary plenary session.
Share
Print
List