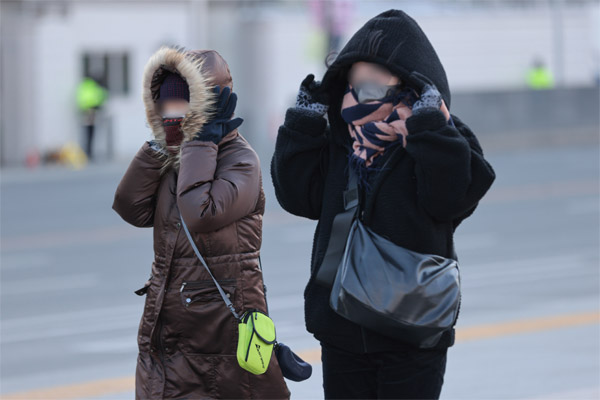 Piercing cold weather has continued into Wednesday with cold wave alerts issued across the nation.

Temperatures in most inland areas fell by up to ten degrees Celsius from a day earlier to around minus 15 degrees Celsius on Wednesday morning. In Cheorwon, Gangwon Province, the mercury plunged as far as minus 21-point-two degrees.

The morning low in the capital, Seoul, slipped to minus 17-point-three degrees, with the wind chill temperature falling to minus 23 degrees.

Afternoon highs are expected to range from minus seven to one degree Celsius, up five degrees from Tuesday.

While most parts of the nation are expected to see clear skies on Wednesday, snow is forecast for western coastal areas in Jeolla Province and Jeju Island.

The cold snap is expected to let up briefly on Thursday before sweeping across the nation again on Friday afternoon.
Share
Print
List