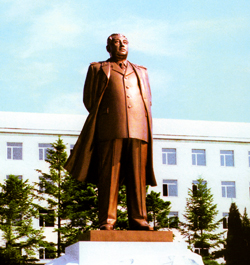 During the 1970s, Kim Il-sung established a system where the entire nation of North Korea came under a one-man rule, with himself as President and his son, Kim Jong-il, as his successor. A cult of personality, bordering on deification, developed around Kim and his son, laying the groundwork for Kim Jong-il’s future rise to power. Naturally, those that opposed this ‘dynastic’ system were singled out for purges. It was the new constitution that laid down the one-man rule system in written law.

At the 1st meeting of the 5th SPA held in December 1972, a new ‘Socialist Constitution’, superseding the ‘Constitution of the People’s Republic’ of 1948, was announced. It reorganized the political bodies and institutional organizations around the President, completing Kim’s one-man rule system.

The ‘Socialist Constitution’ served as the backbone of North Korea’s legal system until major revisions were made in 1992 to accommodate Kim Jong-il’s succession to power. Kim Jong-il began his ‘apprenticeship’ in September 1973, taking public office as a Party Secretary. Meanwhile, the purging process against those opposed to Kim Jong-il’s succession continued, during which Kim Il-sung’s younger brother Kim Young-ju and several military leaders including Kim Dong-gyu, Rhee Yong-mu, and Ryu Jang-sik were eliminated in 1973 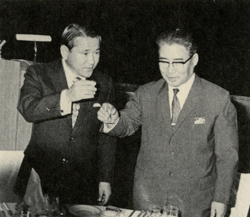 Clandestine contact between the North and South’s leaders led to the ‘7.4 Joint Statement’ of 1972. Following secret meetings held in Panmunjeom, other secret meetings in Seoul and Pyongyang between South Korea’s KCIA Chief Lee Hu-rak and North Korea’s 2nd Vice Premier Park Sung-chul culminated in the joint statement, which was announced simultaneously by both Seoul and Pyongyang. Loosely centered on principles of peace on the Peninsula and initiatives to begin North-South dialogue, the joint statement consisted of :
① the ‘three pillars of reunification’ - independence, peace, and solidarity among the Korean people,
② refraining from denouncing each other and forbidding the use of military force,
③ implementing various North-South cooperative initiatives,
④ cooperation in Red Cross operations,
⑤installing a North-South communications hotline,
⑥ establishing a North-South Coordination Committee,
⑦ and faithfully observing the contents of the joint statement. Although the North and South failed to alter their fundamental positions regarding the issue of reunification, the joint statement was nevertheless a sensational happening in that a direct channel of political communication had been established between the leaderships of the two states.

From a North Korean point of view, the joint statement provided an opportunity to burnish Kim Il-sung’s completion of a one-man rule system. Economically, the statement was intended to reverse the North’s shortcomings compared to the South’s. Meanwhile, from an external perspective, the statement indicated that North Korea was diversifying its approach to diplomacy. The political stability in North Korea afforded by the statement continued throughout the 1970s until Kim Il-sung’s death in 1994.

North Korea initially carried out limited diplomacy only with communist states such as China and the Soviet Union. However, the rift in the communist camp prompted North Korea to establish relations with neutral states in the 1960s. In the 1970s, diplomacy with so-called western states was pursued as well. Several developments in the international arena contributed to this change : China’s admission to the U.N. in 1971, the thawing of U.S.-Sino relations following President Nixon’s visit to China in 1972, the normalization of Sino-Japanese relations, and the concurrent debate between the two Koreas in the U.N. and other international organizations. 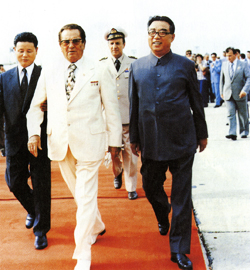 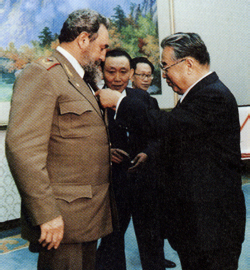 In the 6th Party Meeting held in October 1980, the North Korean leadership announced three fundamental principles in its diplomatic policy - self-reliance, friendship, and peace - and proceeded to pursue more diversified diplomatic relations with ‘western’ states.
Efforts to build relations with the U.S. were also pursued during this time. In January 1984 ‘new measures to spur on Korean detente were discussed by the SPA and the Central People’s Committee, and a proposal was even made to hold three-party talks between the two Koreas and the U.S.

The Economy Comes Under Pressure 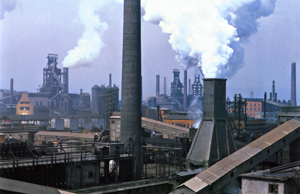 North Korea enjoyed a period of relative stability during the 1970s and 1980s under Kim’s solidified one-man rule.

However, the limitations of socialism soon threatened to bog down the North Korean economy. Socialist labor competition schemes, aid from other communist states, and planned economy policies had previously combined with North Korea’s advantageous industrial infrastructure to create an illusion of rapid economic growth.

However, the Soviet Union’s economic aftermath of Stalinist growth schemes, the Soviet-Chinese divide, equidistance diplomacy by North Korea, the innate limitations of North Korea’s mobilization-reliant economic structure and its economic alienation from major global market economies combined to stunt economic growth. The economic gap between the two Koreas has widened steadily ever since the 1970s.

This plan was launched at the 5th Party Meeting in 1970 with the objective of realizing the ‘three major technological revolutions’ and enhancing the industrial structure of North Korea. It is notable that the roles of technology and capital were emphasized, in recognition of the limitations of the mobilization-reliant economic structure. Thus, the plan focused on adopting technology, capital, and equipment from western states. However, foreign debt became a pronounced problem by 1975, as loans from foreign states and bills for imported goods were not paid on time.

In addition, limitations of North Korea’s chain-of-command approach to economic policy amid expanding economic scale brought about serious problems in social infrastructure such as energy and transportation sectors. The six-year plan was trumpeted as a success in 1975, having supposedly achieved its goals 18 months ahead of schedule.

In reality, however, this was more of an abortive measure as it became apparent that drastic modifications were needed in terms of economic planning. Consequently, North Korea announced a two-year long ‘buffer period’, during which efforts to repair ailing sectors of its economy were pursued.

This plan emphasized the creation of a self-reliant, modernized, and science-driven economy. National income was to be increased to 1.9 times its 1977 level, while gross production of industrial goods and grains was to be boosted 2.2 times and to 10 million tons, respectively.
An announcement was made in February 1985 that all stated objectives had been accomplished by the end of 1984. As with the previous six-year plan, the enactment of a two-year buffer period following this announcement implied that the plan was a failure. Some notable features of the 2nd Seven-Year Plan include :
△the implementation of additional goals such as the 'ten objectives for building a socialist economy for the late 1980s’ and the ‘four areas of development in natural resources’ and
△interest in a more opened economy, such as the expanded pursuit of external economic projects, trade, and the promulgation of the ‘joint business act’

This law was announced at an SPA meeting on September 8, 1984 with the objective of pursuing economic/technological exchange with foreign states and joint investment projects. Officially known as ‘Act on the Operation of Joint Businesses’, it was intended to secure fuels, raw materials, technology, and capital to invigorate the overall economy and meet the economic needs of the people.

The act was essentially a sign of acknowledgment that the economy was stagnating and that obtaining further foreign loans would be difficult. Further legal and institutional devices were provided in March 1985 in the form of ‘regulations concerning the operation of joint businesses’ and the ‘foreigner income tax’. Key participants in such projects were other communist states as well as pro-communist Koreans living in China, Russia, and Japan. North Korea also attempted to attract investment from market economies such as South Korea, Japan, Taiwan, Hong Kong, the U.K., France, and Australia.

As with the 2nd seven-year plan, the 3rd also aimed to realize a self-reliant, modernized, and science-driven economy. National income was to be increased 1.7 times (average annual growth of 7.9%), while gross production of industrial goods and grains was to be boosted 1.9 and 1.4 times respectively. Some of the ‘ten objectives’ were modified to include new production and construction objectives. Key features of the 3rd seven-year plan include :
△scaled-down objectives, reflective of the overall economic stagnation at the time,
△top priority on technological innovation, and
△further emphasis on trade and economic cooperation with foreign states. North Korea expressed an increased willingness to open up its economy by announcing the ‘Najin-Sunbong Free Trade Zone’ in connection with the UNDP (United Nations Development Program)’s Tumen River delta development project.

To compete with the 1988 Seoul Olympic Games, North Korea mobilized large proportions of labor and capital investment to hold the 13th World Festival of Youth and Students, but saw little overall progress. The downfall of North Korea’s economic partners following the collapse of the Soviet Union and the eastern European communist states, a politics-dominated national agenda, the general lack of material resources, and other negative factors led to the plan’s utter failure.

National income grew to only 61% of what was originally planned, while net exports stopped short at 52.5% and growth in other key sectors remained at 20~50% of targeted levels. For the first time, North Korea had no choice but to officially acknowledge its failure.

Conversations between the leadership of both Koreas saw little progress following the 7.4 Joint Statement of 1972. Any communication that did take place soon devolved into bickering and most of the contents of the joint statement were not observed. However, some essential changes were underway in North-South relations.

The tense atmosphere and animosity had subsided partially, and intermittent events such as Red Cross talks, reunions between separated family members, and provision of relief aid took place. By the end of Kim Il-sung’s rule, economic cooperation projects were being discussed on a practical level. Although cancelled by Kim Il-sung’s death in 1994, a North-South summit meeting had been pursued up until then. 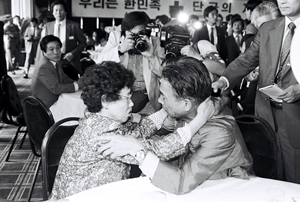 The first separated-family reunions were held in 1985

On August 12, 1971, the South Korean Red Cross proposed to its northern counterpart via KBS radio broadcasts that a meeting be held between family members separated during the Korean War.

Two days later, the North Korean Red Cross consented through Pyongyang Broadcasting, leading to North-South Red Cross talks. However, the 1st and 2nd round of talks produced little results other than five basic principles to be observed concerning the meetings between separated families: to confirm the addresses of separated family members (if alive), free visiting and gathering, free exchange of letters, and other specifics in accordance with humanitarian principles. Talks resumed after the North Korean Red Cross announced it would provide relief for massive floods that struck South Korea in 1984.

Three rounds of talks led to an agreement to hold reunions for separated families. From September 20th to 23rd, 1985, the chairmen of both Red Crosses led 151 family members to Seoul and Pyongyang. There were moving scenes as family members were able to reunite, albeit temporarily and under strict supervision, for the first time in over three decades. Most people previously had no idea whether their family members were alive or dead. However, no such meetings would take place again until the 2nd reunion event in the year 2000.

The late Jung Joo-young, President of the Hyundai Group, leads his herd of cattle to the North

Improvements in North-South relations did not occur only in the form of humanitarian efforts such as the meetings of separated families and supply of relief aid. Though extremely limited, various transactions and exchanges between the two Koreas were beginning to take place, sending signals that the divide was slowly being overcome.

Foundations were being laid for civilian-level economic cooperation, while some transactions were realized between South Korean corporations and North Korea. One notable incident was the visit paid by Jung Ju-young, president of the Hyundai Group at the time, to Pyongyang. Jung met with most North Korean leaders including Kim Il-sung before his return to Seoul.

The visit signaled the beginning of actual North-South economic cooperation, embodied in a project to send South Korean tourists to the famed Mt. Geumgang in North Korea. Although the project was initially a far-fetched idea and was not realized until ten years later, the very possibility that ordinary South Korean citizens, not political figures, could freely visit North Korean territory earned it a place in history.