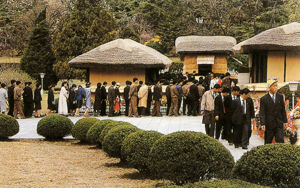 Mangyungdae, Kim Il-sung’s place of birth, has become a place of pilgrimage due to his cult of personality

Kim Il-sung was born ‘Kim Sung-ju’ on April 15, 1912 in Nam-ri, Gopyung District of South Pyongan Province’s Daedong County (currently the Mangyung-dae area of Pyongyang City) to father Kim Hyung-jik and mother Kang Ban-suk. Shortly after his birth, Kim’s family moved to the Jilin Province’s Fu-ssung City in Manchuria. Kim entered the Yuk-mun middle school in 1926 but dropped out three years later. Trained as a special ops agent by Soviet forces, he returned to North Korea as a major in the Red Army following the end of WWII.

Fully backed by Soviet forces, Kim grasped power in the communist party and North Korea government. He then invaded South Korea in 1950 to start the Korean War. After the War, he eliminated dissidents such as the Yon-an, Gapsan, and Soviet-based factions to solidify a one-man rule system. A cult of personality bordering on deification developed around Kim since the late 1960s. Therefore, modern and contemporary The North Korean history is none other than that of Kim and his family.
During his later years, North Korea suffered from political alienation and economic isolation due to the rift that had formed since the late 1980s between the two great communist powers - China and Russia.

Furthermore, the North Korean economy was stagnating due to its innate problems. Kim Il-sung attempted to overcome these difficulties through improving North-South relations. Although he went was far as pursuing a summit meeting between the two Koreas, he died of a heart attack on July 8, 1994.
His elder son, Kim Jong-il, was able to succeed to power, thanks to the painstaking preparations that had been underway for more than a decade, the overwhelming cult of personality, and the unique charisma of Kim Il-sung. Kim Il-sung certainly lives on after his death in the monolithic thought system of ‘Juche’. During the three-year transitional period following his death, the deceased Kim Il-sung ruled through the ‘bequest rule’. He still ‘reigns’ as the ‘eternal’ President, even well into the Kim Jong-il era.
Kim Il-sung’s body is preserved at the Presidential Palace in Pyongyang.

There is much debate as to who Kim Il-sung really was. The traditional cult of personality surrounding Kim makes one hesitant to follow North Korea's allegations at face value. Particularly, while one can track Kim Il-sung’s history after he returned to North Korea, his earlier years are shrouded in obscurity.
At the heart of the debate lies the issue of whether Kim Sung-ju is the same person as the Kim Il-sung who we know as having ruled North Korea.

This is a sensitive issue, as it touches on his history of resistance against the Japanese. Kim’s supposed history as an anti-Japan leader played a vital role in justifying his initial rise to power in North Korea. One frequently-mentioned achievement is the 1937 Bocheon-bo Battle, where Kim supposedly led resistance forces to victory over a heavily fortified Japanese police force.

The event was recorded as one that gave hope to the Koreans and terror to the Japanese colonialists. Kim’s public debut as a resistance hero was crafted in 1946 by the Soviet Commander in North Korea, Romanenko. The man that Romanenko introduced to the people was ‘Kim Il-sung’, not ‘Kim Sung-ju’. Therefore, some claim that ‘Kim Il-sung’ was an alias used by Kim Sung-ju for his resistance activities, while others believe that Kim Sung-ju had made fraudulent use of the name of the resistance hero Kim Il-sung. 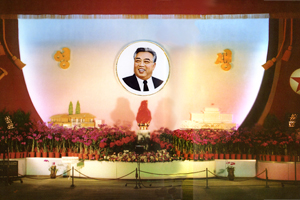 The deification of Kim Il-sung continues even after his death

There are two pillars to the veneration process. First, Kim supposedly came from a lineage of people’s leaders ever since the time of King Sunjo of the Chosun Dynasty. Upholding the family tradition, Kim had become a hero in the anti-Japanese resistance. Such is the ‘reconfigured’ version of Korean history used for the process of indoctrination.

Therefore, modern Korean history was focused around Kim’s lineage while the history of anti-Japanese resistance recounted the heroic exploits of Kim Il-sung the revolutionary. The north korean version of history served to justify the one-man rule regime under Kim. Second, Kim’s various abilities were praised to the extreme. Not only was he a resistance hero, he was also a thinker greater than Marx or Lenin and a theorist of unfathomable wisdom on all subjects including politics, economics, society, culture, and the arts. This is the second pillar upholding the one-man rule. History and exceptional individual talent were combined to justify Kim’s regime.

The most exalted of titles, such as ‘Father Chairman’, ‘Great Chairman’ and ‘Heavenly One’ were used to address Kim. His name was printed in bold type on all publications, making it stand out from the rest of the text. Furthermore, the entirety of North Korea’s institutional documents, including the constitution, labor laws, land laws, and educational theses were authored by Kim. All publications, including newspapers, magazines, school textbooks, and academic texts, were prefaced by ‘words of instruction’ from Kim. All North Koreans were taught at school that they were clothed, fed, and nurtured in all aspects of life by the ‘grace of the Chairman’. A portrait of Kim was to be placed in all homes, while ‘places of worship’ including 35,000 statues of Kim, were erected throughout the nation.

The deification continued even after Kim’s death. His body is preserved ‘for all eternity’ at the Presidential Palace in Pyongyang, while his authority remains enshrined through the title ‘Eternal President’, the supposed apex of the ‘bequest rule’ system. Thus, Kim Il-sung’s eternal authority serves to justify Kim Jong-il’s one-man rule. Although it is arguable that Kim Il-sung’s reign cannot be ‘eternal’ after all, it is still too early to tell for sure.