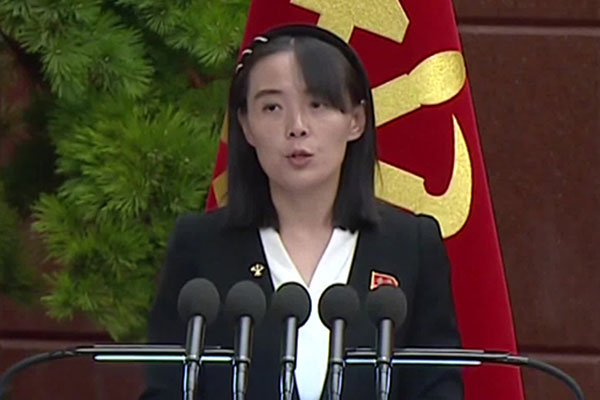 Kim Yo-jong, the sister of North Korean leader Kim Jong-un, has called President Moon Jae-in’s proposal to declare a formal end to the Korean War “interesting” and “a good idea.”

Kim, who serves as the deputy director of the ruling party's Publicity and Information Department, said such a declaration could end the decades-long instability on the Korean Peninsula and have the involved parties withdraw hostilities against each other.

She set preconditions to the declaration and improvement in inter-Korean relations, saying they must guarantee mutual respect and withdrawals of bias, antagonistic policies and unfair double standards.

She said as long as Seoul stops provocations, applying a double standard and hostility against Pyongyang, the regime is open to close communication and resuming dialogue to restore and develop inter-Korean ties.

The U.S. on Friday reiterated its willingness to meet with North Korea without preconditions and hoped for a positive response from Pyongyang.

In a virtual press briefing, State Department spokesman Ned Price said the U.S. goal is the complete denuclearization of the Korean Peninsula and it will continue to seek engagement with the North as part of a calibrated practical approach, in order to make tangible progress that increases security not only for the U.S., but also for allies and its deployed forces.

He stressed the U.S. has no hostile intent towards North Korea and is prepared to meet without preconditions, and hoped the regime would respond positively to its outreach.

Price also highlighted trilateral efforts with South Korea and Japan, saying that one of the primary topics of a three-way meeting held in New York this week was a common approach towards North Korea.

He said that to be effective, the U.S. needs to continue to be and work in lockstep with its partners in Seoul and Tokyo.

Price also expressed support for inter-Korean dialogue and engagement, saying it is a good thing, and added that the U.S. and South Korea continue to work closely on the broader agenda.