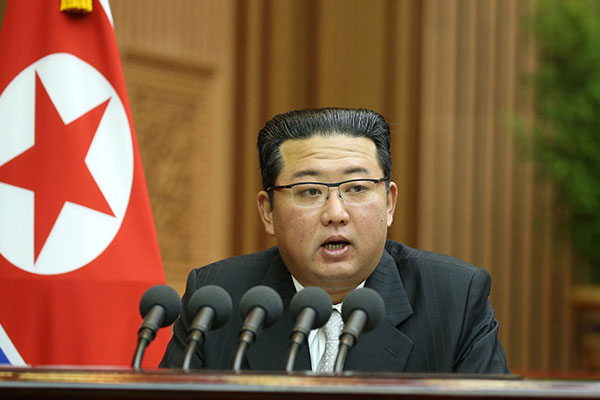 According to the North's official Korean Central News Agency(KCNA) on Thursday, Kim made the remarks the previous day in his speech at the second session of the Supreme People's Assembly.

Kim reportedly expressed his willingness to restore inter-Korean hotlines early next month as part of efforts to realize peoples' hopes for improving inter-Korean relations and creating peace on the Korean Peninsula.

Regarding South Korean President Moon Jae-in's proposal to declare a formal end to the Korean War, Kim said that mutual respect should be assured and unfair double-dealing standards and hostile policies should be abandoned before the declaration.

As for the United States, Kim reportedly said Washington's hostile policies and military threats remain unchanged even under the Biden administration. He then called its offer to meet without preconditions a cover for its hostile policy.

The ruling Democratic Party(DP) welcomed the move, calling it a good sign, with floor leader Yun Ho-jung stressing that it is a stepping stone to peace and co-prosperity.

Yun also vowed timely preparation for inter-Korean Red Cross talks and the ratification of the Panmunjeom Declaration at the National Assembly in accordance with progress being made with North Korea.

The main opposition People Power Party(PPP), on the other hand, slammed Kim Jong-un's remarks, saying South Korea should not be fooled by the North anymore.

Senior spokesperson Heo Eun-a pointed out that South Koreans vividly remember how meaningless the 2018 Moon-Kim summit was, urging the Moon administration to face the reality of Northeast Asian affairs instead of focusing on the upcoming presidential election.

The North’s state-run Korean Central News Agency(KCNA) also said Thursday that Kim Yo-jong, sister of North Korean leader Kim Jong-un, and Jo Yong-won, the secretary of the central committee of the ruling Workers' Party, were selected selected as a member of the State Affairs Commission(SAC), the North’s highest decision-making body, during the  meeting of the Supreme People’s Assembly.

Kim, who is considered a close confidante to her brother, first took charge of projects related to the South starting with the 2018 PyeongChang Winter Olympics and spearheaded efforts to pressure Seoul through severing inter-Korean communication lines and demolishing the joint liaison office with the South.

Earlier this month, she was the one who slammed President Moon Jae-in's comments about North Korea's weapons developments and later positively assessed his proposal to declare a formal end to the Korean War.

Meanwhile, by being selected to the SAC, Jo has reaffirmed his position as the North’s number three figure. He was earlier promoted in January to the General Political Bureau’s standing committee and secretary of the ruling party’s central committee.