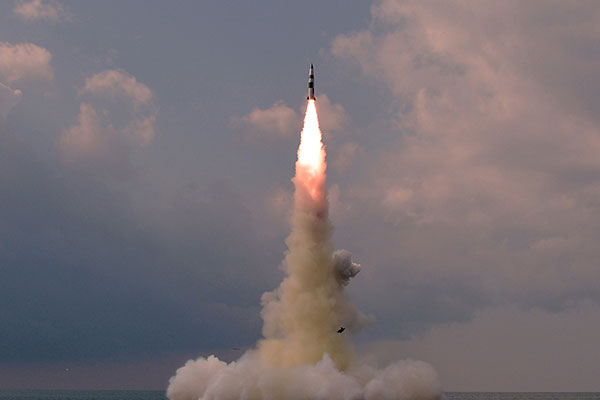 North Korea confirmed on Wednesday that it test-fired a submarine-launched ballistic missile(SLBM) the previous day.

The North’s official Korean Central News Agency(KCNA) said the test-launch of a new SLBM was conducted by the Academy of Defense Science on Tuesday, involving the same submarine that launched the regime’s first strategic SLBM five years ago.

It called the new test a success.

The outlet said the latest missile is equipped with evolved control and guidance technologies, adding that it will significantly contribute to the advancement of the North’s defense technologies and the enhancement of underwater naval operations.

It was speculated to be the mini-SLBM unveiled during a military exhibition in Pyongyang on October 11.

North Korean leader Kim Jong-un did not attend the test.

The South Korean Joint Chiefs of Staff(JCS) said on Tuesday that the North fired what was presumed to be an SLBM into the East Sea at 10:17 a.m. from waters east of the northeastern port city of Sinpo, where the North’s submarine shipyard is located.

In a media briefing on Tuesday, White House spokesperson Jen Psaki called it a violation of multiple UN Security Council resolutions and a threat to the region. She then said that the U.S. urges the regime to refrain from additional provocation.

Psaki said the launch sheds light on the urgent need for dialogue and diplomacy, noting that the U.S.’ proposal to meet with the North anywhere, anytime without preconditions remains valid.

North Korea said Thursday that the missile test did not target the United States.

According to the North's official Korean Central News Agency, a spokesperson of the Foreign Ministry said on Thursday that without obstruction of the North's rightful exercise of sovereignty, there will never be an incident raising tensions on the Korean Peninsula.

The spokesperson then said that the U.S. and UN Security Council(UNSC) could face more grave and serious consequences if they make the wrong choice.

The statement said that the North has already expressed concern that the U.S. and UNSC are "tampering with a dangerous 'time bomb.'"

Defense Minister Suh Wook said on Thursday that the SLBM is believed to be in its primary stage of development, with further analysis under way.

When asked about the timing of its deployment during a parliamentary audit session, Suh said the SLBM would still need to be integrated with a submarine as a launch platform.

The minister said the platform and its stable operation following a launch would have to be further analyzed. He added that the North's SLBM could likely be intercepted.

Asked to compare the North's SLBM to that of South Korea, Agency for Defense Development(ADD) President Park Jong-seung said considering the need to integrate the missile with its platform, he believes there's a gap of at least five years.